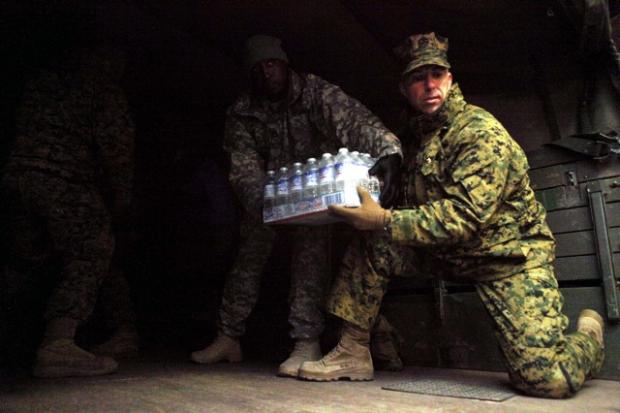 To say this is a busy time for the U.S. military is an understatement: Iraq, Afghanistan, helping Japan recover from its greatest postwar crisis, and now Libya. But the admiral in charge of disaster relief in Japan says that implementing a no-fly zone over Libya won’t stop a relief operation in Japan that’s ratcheting up.

“We’re constantly managing the forces that we have on hand and the back fill of those forces as required,” Adm. Robert Willard, chief of U.S. Pacific Command, told reporters at the Pentagon last night via teleconference. While it was “fair” to wonder about military overstretch from Libya, Willard said that it was just plain luck that “the U.S.S. Ronald Reagan strike group was proximate to Japan when the disasters occurred and could offer immediate support.”

With the new United Nations Security Council resolution against Moammar Gadhafi’s aircraft in place, the Pentagon may soon need to make some hard decisions about what military hardware to bring into the southern Mediterranean. It would hardly make any sense to send the Reagan strike group halfway around the world to support the no-fly, even if there were no Japan disaster; the aircraft carrier U.S.S. Enterprise is in the Red Sea nearby.

For now, Willard isn’t sweating it. He’s got a Global Hawk drone conducting surveillance for the search and rescue mission. And he’s got a Constant Phoenix plane heading in for atmospheric detection, to learn which areas are too radioactive to safely assist the relief due to the crisis at the Fukushima Daiichi Nuclear Power Station. That’s on top of the bevy of lift helicopters taking off from the Reagan that have provided “28 tons of food, water, clothes, medicine, toiletries, baby supplies, and much needed kerosene,” according to the Seventh Fleet’s Facebook update this morning.

There are other forces that won’t be necessary for Libya, Iraq or Afghanistan heading to Japan. Willard said he had requested 450 “radiological and consequence-management experts” to head to Japan, and they’re currently on a “prepare-to-deploy” order. But an advance team is conducting “a broad assessment” around the stricken power plant to see if it’s safe enough to “rationalize bringing a larger force forward,” Willard said.

If it does, then the Pentagon might find itself taxed additionally. It’s possible that it can mitigate its contribution to the Libya no-fly through the commitment of British and French planes and support. And Japan doesn’t need any F-22s to help it out. But the longer that each crisis gets drawn out, the further the Pentagon will find itself squeezed, as it deals with four major crises simultaneously — and each of the armed services plays a leading role in at least one of them.

The US Military Is Using Online Gaming to Recruit Teens

US Deploys B-1B Bombers to Guam

Mexico's war on drugs: Moment THREE cartels ambush the military who fight back...