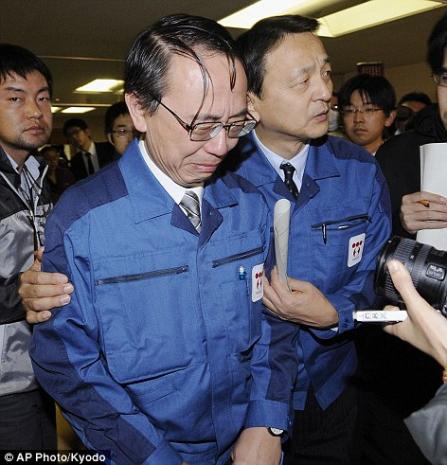 Japan's Nuclear and Industrial Safety Agency admitted that the disaster was a level 5, which is classified as a crisis causing 'several radiation deaths' by the UN International Atomic Energy.

Chief Cabinet Secretary Yukio Edano said: 'The unprecedented scale of the earthquake and tsunami that struck Japan, frankly speaking, were among many things that happened that had not been anticipated under our disaster management contingency plans.

'In hindsight, we could have moved a little quicker in assessing the situation and coordinating all that information and provided it faster.'

Nuclear experts have been saying for days that Japan was underplaying the crisis' severity.

It is now officially on a par with the Three Mile Island accident in Pennsylvania in 1979. Only the explosion at Chernobyl in 1986 has topped the scale.

Deputy director general of the NISA, Hideohiko Nishiyama, also admitted that they do not know if the reactors are coming under control.

He said: 'With the water-spraying operations, we are fighting a fire we cannot see. That fire is not spreading, but we cannot say yet that it is under control.'

'We will rebuild Japan from scratch,' he said in a televised speech: 'In our history, this small island nation has made miraculous economic growth thanks to the efforts of all Japanese citizens. That is how Japan was built.'

It comes after pictures emerged showing overheating fuel rods exposed to the elements through a huge hole in the wall of a reactor building at the destroyed Fukushima nuclear plant.

Radiation is streaming into the atmosphere from the used uranium rods at reactor number four, after a 45ft-deep storage pool designed to keep them stable boiled dry in a fire.

And some of the radioactive material could reach Britain within a fortnight, according to experts.

However they say it will not be dangerous when it reaches our shores while low levels of radiation have already hit Southern California. Exposed: this shots shows a gaping hole in the building of reactor number four. The green crane, circled, is normally used to move spent fuel rods into a 45ft deep storage pond, just out of shot. But the pool has now boiled dry and the spent rods are heating up and releasing radiation Boiled dry: This shot shows of the inside of reactor number four at the Fukushima nuclear plant before the disaster. The spent fuel storage pool is seen at the front of the shot. The rods are at the bottom of the pool, which has now boiled dry

A UN official said the radiation reaching America is 'about a billion times' beneath health-threatening levels.

An airborne plume of radiation is expected to be swept towards Europe, and again officials stress that the levels reaching the UK will not be high enough to pose any risk to human health.

'It is not something you see normally,' he said. 'But it is not high from any danger point of view. It is only a question of very, very low activities so it is nothing for people to worry about.'

The prediction that particles could reach Britain within two weeks is based on previous data, gathered by scientists observing nuclear testing in China.

Meanwhile,  workers at the devastated power station are continuing their desperate battle to prevent a complete meltdown which some fear could be as bad as Chernobyl.

The latest pictures show a whole wall missing from the building housing reactor number four. Inside, a green crane normally used to move spent fuel rods into the storage pool can be seen. Underneath the crane, but not seen in the picture, is the 45ft-deep spent fuel storage pool which has boiled dry.

Officials at Fukushima are rapidly running out of options to halt the crisis. Military trucks are spraying the reactors for a second days with tons of water arcing over the facility.

Engineers are trying to get the coolant pumping systems knocked out by the tsunami working again after laying a new power line from the main grid.

And they today admitted that burying reactors under sand and concrete - the solution adopted in Chernobyl - may be the only option to stop a catastrophic radiation release.

It was the first time the facility operator had acknowledged burying the sprawling 40-year-old complex was possible, a sign that piecemeal actions such as dumping water from military helicopters or scrambling to restart cooling pumps may not work.

'It is not impossible to encase the reactors in concrete. But our priority right now is to try and cool them down first,' an official from the plant operator, Tokyo Electric Power Co, told a news conference.

But some experts warned that even the concrete solution was not without risks.

'It's just not that easy,' Murray Jennex, a professor at San Diego State University in California, said when asked about the so-called Chernobyl option for dealing with damaged reactors, named after the Ukrainian nuclear plant that exploded in 1986.

'They (reactors) are kind of like a coffee maker. If you leave it on the heat, they boil dry and then they crack,' he said.

'Putting concrete on that wouldn't help keep your coffee maker safe. But eventually, yes, you could build a concrete shield and be done with it.'

And Yukiya Amano, the head of the U.N.'s International Atomic Energy Agency said workers were in a 'race against the clock' to cool the reactor.

Attempts to quell the overheating plant with waterbombs from helicopters yesterday failed and despite the army pelting the site with water cannon, radiation levels rose higher.

Engineers are also working to restore power to the coolant pumping system knocked out by the tsunami. There was a potential breakthrough when engineers succeeded in connecting a power line to Reactor 2. This should enable them to restore electricity to the cooling pumps needed to prevent meltdown.

But it is not certain the system will work after suffering extensive damage.

As the crisis entered its eighth day, the Japanese government was facing growing international condemnation for its handling of the world's second worst nuclear disaster since Chernobyl and for the lack of information it is giving experts and the public.

Officials have declared a 12-mile evacuation zone around the plant on the north eastern coast. Another 140,000 people living within 18 miles have been told not to leave their homes.

But Britain, which is pressing Japan to be more open about the disaster, has advised citizens to give the area a 30-mile berth and to quit Tokyo nearly 150 miles to the south.

Yesterday thousands headed to Tokyo's airport to leave the country for whichever destination they could find.

America, France and Australia are also advising nationals to move away from the plant.

A week after the earthquake and tsunami, authorities are still struggling to bring it back from the brink of disaster.

Four of six nuclear reactors at the site have been hit by explosions and fires which have sent clouds of low-level radiation into the air.

The team of exhausted workers battling to prevent meltdown at the site – dubbed the 'Fukushima Fifty' – are unable to approach the most badly damaged reactors because radiation levels are so high.

Hydrogen explosions blew the roofs off both buildings earlier this week, leaving the pools exposed to the elements.

Water levels in the tanks have dropped dramatically in the last few days, possibly because of a leak caused by the earthquake. Waste in Reactor 3 is completely exposed to the air and is emitting alarming levels of radiation as it heats up. Getting worse: The Inernational Atomic Energy Agency has upgraded the disaster to a level five. But French officials have previously claimed it is  a six Staging point: Fiire engines gather in Iwaki today as they prepare to douse overheating reactors and spent fuel at the plant

Unlike the other reactors which use uranium, Reactor 3 uses a mixture of uranium and plutonium. Plutonium, best known as an ingredient in nuclear weapons, is particularly dangerous if released into the environment.

In the worst case scenario, exposed fuel will melt, triggering a chemical explosion that will send radioactive dust hundreds of yards into the air.

Chinook helicopters flying at less than 300 feet dropped four loads of water over the wrecked building in the hope that some water would seep into the dried-out pool and cool the fuel. Growing criticism: The Japanese government is the target of growing criticism over the nuclear crisis.  A businessman are pictured receiving a radiation scan at a screening centre in Koriyama after being evacuated form their homes International alarm: Passengers arriving from Japan are scanned at Kuala Lumpur airport in Malaysia, left, and Japanese passengers disembraking from a ferry walk through a scanner in Busan, South Korea

However, footage suggested much of the 2,000 gallons of water missed its target.

Later, six fire engines and a water cannon tried to spray the building with 9,000 gallons of water from high pressure hoses. However, radiation levels within the plant rose from 3,700 millisieverts to 4,000 millisieverts an hour immediately afterwards.

People exposed to such doses will suffer radiation sickness and many will die. Today Tokyo Electric Power, which owns the plant, will try to restart the reactor's cooling systems after workers connected a half mile long power cable from the national grid to Reactor 2.

Spokesman Teruaki Kobayashi said: 'This is the first step towards recovery.'

He added: 'We are doing all we can as we pray for the situation to improve.'

Last night 14,000 were confirmed dead or missing in Japan and 492,000 are homeless. There are 850,000 households in the north of the main island without electricity in freezing temperatures. Fleeing: Passengers queue at the ticket counter to buy tickets for the earliest possible flight as they attempt to evacuate from Japan at Narita International Airport near Tokyo Exhausted: Children sleep on the floor of Narita International Airport as their parents try to get on a flight out the country