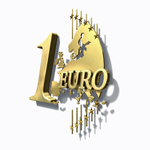 EU ushers in 'silent revolution' in control of national economic policies ... The new framework constructs unprecedented new intervention in national budget and economic decisions ... After months of often bitter back-room negotiations, European finance ministers have finally given the green light to a radical new centralised EU oversight of national budgeting processes and, broader still, of all economic policies – both of countries that use the single currency and those that do not. – EU Observer

Dominant Social Theme: The EU boot descends. And about time!