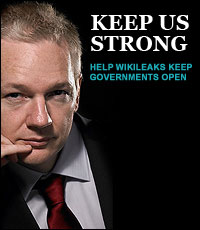 If you are new to these pages, please read an introduction on the structure of a cable as well as how to discuss them with others. See also the FAQs

Understanding cables
Every cable message consists of three parts: The top box shows each cables unique reference number, when and by whom it originally was sent, and what its initial classification was. The middle box contains the header information that is associated with the cable. It includes information about the receiver(s) as well as a general subject. The bottom box presents the body of the cable. The opening can contain a more specific subject, references to other cables (browse by origin to find them) or additional comment. This is followed by the main contents of the cable: a summary, a collection of specific topics and a comment section. To understand the justification used for the classification of each cable, please use this WikiSource article as reference.
Discussing cables
If you find meaningful or important information in a cable, please link directly to its unique reference number. Linking to a specific paragraph in the body of a cable is also possible by copying the appropriate link (to be found at theparagraph symbol). Please mark messages for social networking services like Twitter with the hash tags #cablegate and a hash containing the reference ID e.g. #06TOKYO1592.
Reference ID Created Released Classification Origin VZCZCXRO2402
PP RUEHHM RUEHLN RUEHPB
DE RUEHKO #1592/01 0860917
ZNR UUUUU ZZH
P 270917Z MAR 06
FM AMEMBASSY TOKYO
TO RUEHC/SECSTATE WASHDC PRIORITY 0173
INFO RUEHZN/ENVIRONMENT SCIENCE AND TECHNOLOGY COLLECTIVE
RHEBAAA/USDOE WASHDC
RUEHFK/AMCONSUL FUKUOKA 5332
RUEHNAG/AMCONSUL NAGOYA 5344
RUEHNH/AMCONSUL NAHA 7968
RUEHOK/AMCONSUL OSAKA KOBE 8483
RUEHKSO/AMCONSUL SAPPORO 6517
RUEAIIA/CIA WASHDC UNCLAS SECTION 01 OF 03 TOKYO 001592

¶1. (SBU) On March 24, the Kanazawa District Court ordered the Hokuriku Electric Power Company (Rikuden) to shut down operations at Unit Two of its Shika Nuclear Power Plant due to safety concerns over its ability to withstand powerful earthquakes. The court ruled that there was a real possibility that the plaintiffs might be exposed to radiation if there was an accident at the plant. The operator called the ruling "unreasonable" and said it would immediately file an appeal to a higher court. The Nuclear and Industrial Safety Agency (NISA) believes the reactor is safe and that all safety analyses were appropriately conducted. As a result, the GOJ sees no reason why Rikuden should shut down the unit. Though not legally obligated to cease operations in this case since this is a civil suit, Rikuden will face an uphill battle to regain the support of local citizens for operating a nuclear facility in their backyards. End summary.

¶2. (U) On March 24, the Kanazawa District Court ordered the Hokuriku Electric Power Company (Rikuden) to shut down operations at Unit Two of its Shika Nuclear Power Plant (NPP) due to safety concerns over its ability to withstand powerful earthquakes. A group of 135 plaintiffs from across the country filed the suit against Rikuden in May 2005, after the operator began trial operations, arguing that its anti-seismic design was insufficient and the advanced boiling water reactor (ABWR) design was inherently dangerous. The suit followed up on an earlier unsuccessful attempt to halt the construction of the new reactor. The plaintiffs pointed to a study commissioned by the GOJ's Earthquake Research Committee that concluded there was a two percent chance that an earthquake with a magnitude of 7.6 or higher could occur along the 44-kilometer long Ochigata fault, which runs near the NPP. The unit was built to withstand a magnitude 6.5 earthquake. The plaintiffs claimed that Unit Two was built to seismic specifications established more than two decades earlier and therefore posed a direct threat to their safety.

¶3. (U) According to press coverage, the presiding judge said that Rikuden had not taken into consideration an earthquake that may occur along the Ochigata Fault when building the new reactor. In addition, the judge stated that there was a real possibility that the plaintiffs might be exposed to radiation if there was an accident at the plant due to a large earthquake. The court argued that Rikuden's estimates of potential earthquakes in the area were too conservative. The court, however, rejected the group's claim that the ABWR design was unsafe, citing lack of evidence.

¶4. (U) Rikuden President Isao Nagahara issued a press release later on the same day in which he called the Kanazawa District Court's decision not to recognize the safety of Unit Two "truly regrettable". He also said that it was an "unreasonable ruling" and that Rikuden would immediately file an appeal to a higher court. The President also stated that the GOJ is currently examining its anti-seismicity design specifications, and if there were to be a change to those specifications, Rikuden would ensure that the safety of its reactors would be up to par
with any new requirements. Unit Two began operations on March 15 after successfully passing the final government required inspections and, according to the operator, is currently operating safely. Nagahara concluded his statement by promising that Rikuden was sufficiently ensuring the operational safety of the reactor, and as a result, would continue operating it even in light of the court decision.

¶5. (SBU) An official at the Nuclear and Industrial Safety Agency (NISA) explained to ESToff that the case in question was a civil lawsuit and that the ruling did not require immediate implementation of the order to shut down the reactor. Had the ruling directly questioned the validity of the national regulations themselves through an administrative lawsuit -- as in the case of the earlier Monju litigation -- then Rikuden would have been obliged to shut the reactor down. Given the legal differences,
however, the official said that Rikuden could continue operating as is.

¶6. (U) In its 2005 annual report, Rikuden wrote that it places top priority on the safe and stable operation of the Shika NPP. The operator said it was determined to continuously improve its quality management system through auditing and by taking into consideration the advice of an outside experts' panel on nuclear power safety and quality. Because the operator is convinced its plant is safe, Rikuden has announced it will continue operating Unit Two for the time being.

-- Government Regulators Surprised at Ruling, but not Concerned over Safety --

¶7. (U) Most of the national dailies ran stories covering the court decision, and speculated that it would send shivers throughout the industry. The Yomiuri quoted NISA's Director-General Kenkichi Hirose as saying "I've never thought that a court would order the cessation of the plant's operation." Other dailies wrote that as a result of the decision, Japan's Nuclear Safety Commission was scrambling to formulate new anti-seismic design regulations by this summer.

¶8. (SBU) ESToff called NISA's International Affairs Office Director Michio Hashimoto to obtain further information on the regulator's position on the court ruling. Hashimoto said that NISA believes the reactor is safe and that all safety analyses were appropriately conducted. As a result, NISA saw no reason why Rikuden should shutdown Unit Two.

¶9. (SBU) EST FSN also called Takuya Itoh, Staff Manager of the Federation of Electric Power Companies' Public Relations Department for the industry group's position on the court ruling. Itoh said that the Federation was taking the decision seriously. The group will continue its efforts to ensure that all of Japan's nuclear facilities operate safely and will work to obtain public acceptance of the facilities. As an aside, he told EST FSN that he personally does not feel that others in the Federation were overly concerned about the result of the lawsuit.

¶10. (U) The Hokuriku Electric Power Company operates the Shika Nuclear Power Plant, which is located in Shikamachi, Ishikawa Prefecture. It is the power company's sole nuclear facility. Unit Two is an advanced boiling water reactor or ABWR that began limited commercial operations on March 15, 2006. The unit was built at a cost of 375 billion yen (USD 3.2 billion). Its projected output is 1,358MW.

¶11. (SBU) The suit against Rikuden claiming the Shika NPP is unsafe due to seismic concerns is not surprising, given the many similar lawsuits that have been filed in the past. ESToff had previously attended an anti-nuclear symposium where civic leaders called for the immediate shutdown of Chubu Electric's Hamaoka Nuclear Power Plant, where they also argued the NPP presented a serious radiological threat to Tokyo and surrounding areas if a massive earthquake were to occur in the Tokai region of Japan. (For more see Nagoya 003). What is surprising in this case, however, is the fact that the plaintiffs won. The only previous


successful suit against operating nuclear facilities was the case brought against the Monju fast breeder reactor several years ago. In January 2003, the Nagoya High Court's Kanazawa Branch nullified the GOJ's May 1983 construction approval for Monju by supporting a suit filed by 32 plaintiffs who claimed that a massive leak of sodium coolant at the reactor resulted from shortcomings in the government's safety assessment for the reactor prior to its construction. On May 30, 2005, however, the Supreme Court handed down a ruling that no unacceptable flaws or faults existed in the original safety assessment, thus overturning the lower court's decision. (For more see 05 Tokyo 4067).

¶12. (SBU) Though not legally obligated to shut down operations in this case, Rikuden will face an uphill battle trying to regain the support of local citizens for operating a nuclear facility in their backyards, especially if they are now convinced that the next big quake will bring radiological devastation. Given the potential public relations ramifications from the court decision, the national government decided to act quickly in a public way - on April 1, NISA will establish a new inspection office to deal specifically with anti-seismic safety issues, as a result of the ruling. End comment.