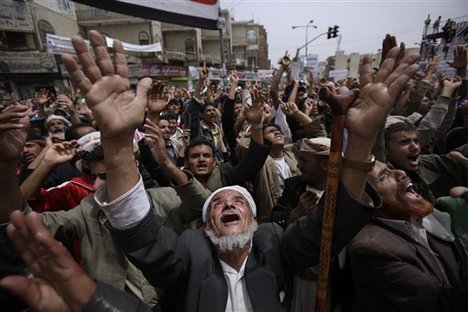 This just in: spurred on by the United States and Saudi Arabia, the UN Security Council has just authorized immediate military intervention in Yemen to stop the government’s wanton slaughter of innocent civilians engaging in peaceful protest.

The vote came just hours after government security forces in Yemen opened fire on unarmed, peaceful protestors in the capital city of Sana. Tens of thousands of ordinary citizens had turned out for the demonstration, which was part of  an ongoing campaign of non-violent dissent against repression, injustice, inequality and deprivation in the nation, ruled by strongman President Ali Abdullah Saleh.

U.S. Secretary of State Hillary Clinton declared that “we cannot stand by and watch authoritarian governments gun down their own unarmed citizens in the street.”  The Security Council authorized a wide range of military actions against Yemen, although an outright military occupation was not authorized. “These creatures who do terrible things to their own people must know they will be held accountable by the world community,” said Clinton, after arriving in Bahrain for what she called “friendly talks” with King Hamad Bin Isa al-Khalifa on “securing stability in the region.”

Oh wait, that didn’t happen. The regime in Yemen will not face military intervention by the UN to stop its slaughter of unarmed civilians. There will be, at most, a few stern words from the Obama Administration urging “restraint on both sides” — even as the Peace Laureate carries on his secret bombing campaigns and covert military operations in Yemen, with the eager cooperation of Saleh. “Restraint,” in the degraded imperial parlance of our day, means that unarmed people should allow themselves to be mowed down by American-backed governments without making a big fuss about it. In exchange, Washington will then publicly urge its local client tyrant to “move” on “the reform process” — even as it sells him more weapons and kills more of his people in its covert ops.

But as the world’s attention was drawn to Libya, here’s what the Peace Laureate’s good buddy in Yemen has been up to today. From the NYT:

Security forces and government supporters opened fire on demonstrators on Friday as the largest protest so far in Yemen came under violent and sustained attack in the center of the capital, Sana. At least 10 people were killed and more than 100 injured, according to a doctor at a makeshift hospital near the protest. …

UN/WEF Officially Announce Lockdown Of All Major Cities To "Save The Climate"! FULL SHOW 1

Supercomputer prophesy of the Sixth Mass Extinction coming "like an asteroid"...

COP27: Where Green Deals Are Signed In Red Ink

Spending Your Money: It's 'Finance Day' At COP27