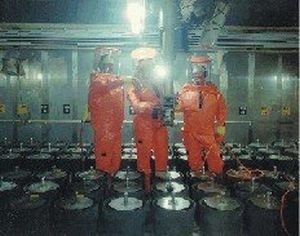 Largely absent from most mainstream media reports on the Fukushima Daiichi nuclear disaster is the fact that a highly-dangerous “mixed-oxide” (MOX) fuel in present in six percent of the fuel rods at the plant’s Unit 3 reactor. Why is MOX a big deal? According to the Nuclear Information Resource Center (NIRS), this plutonium-uranium fuel mixture is far more dangerous than typical enriched uranium — a single milligram (mg) of MOX is as deadly as 2,000,000 mg of normal enriched uranium.

On March 14, Unit 3 of the Fukushima reactor exploded, sending a huge smoke plume into the air. This particular reactor, of course, contains the rods fueled with MOX. You can watch a clip of that explosion here:
http://www.youtube.com/watch?v=T_N-…

If even a couple milligrams of MOX were released during this explosion — or if other explosions at the plant inflict any damage on the MOX-filled rods — then the consequences could be exponentially more devastating than the mere leakage of enriched uranium. And since nobody knows for sure exactly which rods have been damaged, and whether or not the situation can actually be contained, it is only a matter of time before the world finds out for sure.

An exact quote from the report reads:

“In the event of such accidents (involving the accidental release of MOX), if the ICRP (International Commission on Radiological Protection) recommendations for general public exposure were adhered to, only about one mg of plutonium may be released from a MOX facility to the environment. As a comparison, in [sic] uranium fabrication facility, 2kg (2,000,000 mg) of uranium could be released in the same radiation exposure.”

Stock up with Fresh Food that lasts with eFoodsDirect (AD)

A simple calculation reveals that one mg of MOX is basically two million times more powerful than one mg of uranium. This is clearly not a good thing when the plutonium-containing fuel rods in Fukushima may be damaged from the recent explosions and leaking into the environment.

A recent National Public Radio (NPR) piece explains that the half-life of plutonium-239, a component of MOX, is an astounding 24,000 years. The same piece explains that if even a small amount of this potent substance escapes from the plant in a smoke plume, the particles will travel with the wind and contaminate soil for tens of thousands of years (http://www.npr.org/2011/03/16/13460…).

Amazingly, most mainstream reports that mention MOX discount it as a non-threat. But the truth of the matter is that the threat posed by MOX is very serious. The NIRS report explains that inhalation of MOX radioactive material is significantly more dangerous than inhalation of normal uranium radioactive particles. You can read the entire MOX report for yourself here:
http://www10.antenna.nl/wise/469-47…