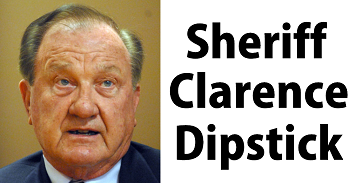 http://thechollajumps.wordpress.com/2011/01/09/jared-loughner-is-a-product-of-sheriff-dupniks-office/
The above link is to a blog written by James Kelley, a contributing columnist for the Arizona News-Telegraph and the Executive Director of SocialNetworkingWatchdog.Org, an organization that educates youth and seniors on personal security while using social networking. He serves as a Republican precinct committeeman in Dist. 29th and is a GOP State Committeeman.
Although he has not revealed his sources for the following information (perhaps planning to reveal thim in an exclusive he might be writing for the News-Telegraph), what he reveals here has been to a lesser extent already confirmed by other reporting agencies; that local law enforcement knew all about Loughner long before the shooting.
Jared Loughner is a product of Sheriff Dupnik’s office

This is the report that Pima County Sheriff Clarence Dupnik has been dreading since the tragic event on Saturday January 8.

The sheriff has been editorializing and politicizing the event since he took the podium to report on the incident. His blaming of radio personalities and bloggers is a pre-emptive strike because Mr. Dupnik knows this tragedy lays at his feet and his office. Six people died on his watch and he could have prevented it.  He needs to step up and start apologizing to the families of the victims instead of spinning this event to serve his own political agenda.

Jared Loughner, pronounced by the Sheriff as Lock-ner, saying it was the Polish pronunciation. Of course he meant Scott or Irish but that isn’t the point. The point is he and his office have had previous contact with the alleged assailant in the past and that is how he knows how to pronounce the name.

Jared Loughner has been making death threats by phone to many people in Pima County including staff of Pima Community College, radio personalities and local bloggers. When Pima County Sheriff’s Office was informed, his deputies assured the victims that he was being well managed by the mental health system. It was also suggested that further pressing of charges would be unnecessary and probably cause more problems than it solved as Jared Loughner has a family member that works for Pima County. Amy Loughner is a Natural Resource specialist for the Pima County Parks and Recreation. My sympathies and my heart goes out to her and the rest of Mr. Loughner’s family. This tragedy must be tearing them up inside wondering if they had done the right things in trying to manage Jared’s obvious mental instability.

Every victim of his threats previously must also be wondering if this tragedy could have been prevented if they had been more aggressive in pursuing charges against Mr. Loughner. Perhaps with a felony conviction he would never have been able to lawfully by the Glock 9mm Model 19 that he used to strike down the lives of six people and decimate 14 more.

This was not an act of politics. This was an act of a mentally disturbed young man hell bent on getting his 15 minutes of infamy. The Pima County Sheriff’s Department was aware of his violent nature and they failed to act appropriately. This tragedy leads right back to Sherriff Dupnik and all the spin in the world is not going to change that fact.