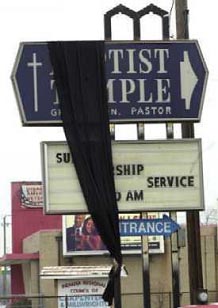 Put in place by church members, a black shroud representing the death of religious liberty is draped over a sign in front of the Indianapolis Baptist Temple. (Staff photo / John Severson)
For 16 years the leaders of the Indianapolis Baptist Temple refused to withhold federal taxes from their employees' paychecks or to pay federal taxes as an employer. The protest came to an end Feb. 13, 2001, when federal marshals seized the church building to pay taxes and fines totalling $6 million.

The church was ordered to be sold at auction by U.S. District Judge Sarah Evans Barker in a Sept. 28, 2000, ruling, in which she gave the conservative evangelical congregation until Nov. 14 to vacate.

When that date arrived hundreds of church members and their supporters waited in the church for the marshals to come. But the U.S. Marshals Office took a cautious approach, seeking to ensure a peaceful end to the standoff that had been building for 16 years. And the church did have one last hope – an appeal to the U.S. Supreme Court. But on Jan. 16, 2001, the Court refused to hear the case. Even after that ruling it would be nearly a month before the marshals came.

The eviction came after the church lost a series of court rulings over its refusal to withhold taxes or to pay any tax itself.
Although churches generally are tax exempt, if they have employees they are required by federal law to withhold federal income taxes from payroll checks, and to pay Social Security and Medicare taxes for each employee.

But the Baptist Temple stopped doing that in 1983 when the church's pastor, the Rev. Gregory J. Dixon, decided the church would break all ties with the government and no longer act as its agent in withholding taxes from its employees.
Dixon, along with his son and co-pastor, the Rev. Gregory A. Dixon, maintained that church workers are ministers, not employees, and that they paid their taxes as individuals. The Dixons based their legal defense on the First Amendment guarantee of free exercise of religion, arguing that Jesus Christ is the only authority over the church and that withholding taxes would impose a secular authority over the church, thereby violating its core belief.
Indianapolis Baptist Temple also argued that the tax laws imposed on churches violate the First Amendment's "Establishment Clause" which is the basis for separation of church and state.
But the courts did not agree. A three-judge panel of the 7th U.S. Circuit Court of Appeals ruled against the church August 14, 2000. Writing the opinion, Judge Ann Claire Williams said that tax laws are "neutral laws" that don't run afoul of First Amendment protections of the free exercise of religion. 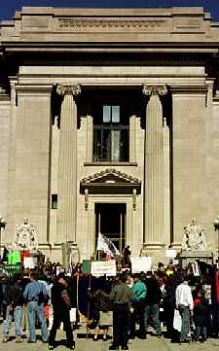 Williams also wrote that the Establishment Clause does not mean the government cannot impose any laws affecting churches. According to the opinion:"If a statute has a secular purpose, and it has a primary effect of neither advancing nor inhibiting religion, it will be upheld."
Origin of the case:
The Indianapolis Baptist Temple was founded in March 1950, and later that year it incorporated as a not-for-profit corporation - as most churches do.
In 1955, Rev. Gregory J. Dixon, then only 23, became pastor. During the next 20 years, the church grew by about 300 members a year, according to the Polis Research Center at IUPUI. The congregation was at its peak during the 1970s, when Baptist Temple had as many as 8,000 members. By the late 1990s, active membership was
estimated at 2,500 to 3,000.
If you want the quarterly Trumpet Newsletter (the voice of the unregistered church movement) Greg Dixon, Editor - send email address to: drgregdixon@earthlink.net.
For more information, go to www.unregisteredbaptistfellowship.com, www.biblicallawcenter.com, and www.trailofbloodrevisited.net