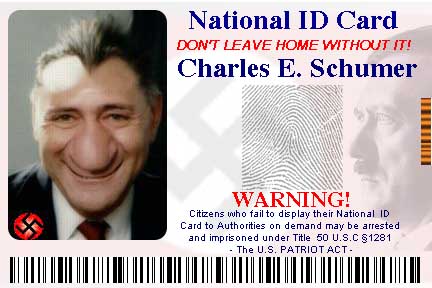 Your article "It's time the U.S. grows up and gets an ID card" ends with, "there's a continuous need to establish that we are who we say we are". I already know who you are: You are the person who, two and one-half years ago, wrote a big article "Facts are clear: War is just, legal".

Do we need a national ID card so we can identify friend from foe? There are sure a lot of folks who hate us because we have initiated so many "just/legal"(?) invasions and coup d'etats and supported so many brutal dictators, juntas and anti-democratic monarchies -- just as we financed, armed and protected Saddam throughout the '80s, the Shah, the Saud family, the Pakistani junta, the Afghani warlords, Panama's CIA admitted-agent, the Uzbeki torturer, assorted puppet governments and the Israeli nuclear superpower rogue state. This covers a lot of dead people, even forgetting the people we murdered in Southeast Asia.

But your article doesn't seem to make sense: If "government already has the information", why do they need another card? If citizens need a "reliable [ID} document", wouldn't a passport or a driver's license suffice?

Your final argument is that Britain is considering such a card. Of course we should copy the Brits. We already have: We copied their policy of destabilizing the governments of countries they want to exploit. Google search "destabilization" and "policy": 174,000 hits! Yes, 174,000. So even disinformational, shallow and confused editors such as yourself can't keep this cat in the bag.

I've got a passport, a driver's license and various other ID cards. I don't need any more. But you do: You need a library card. And you need to use it.

Get Out Of Syria

Wayne Dupree: Here's How November's Election Could Lead To A New Civil War In America

Roosevelt's Fraud at Yalta and the Mirage of the "Good War"

The anti-war wing of both parties is dead