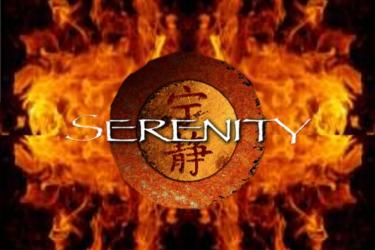 Serenity now playing in your local theaters
Serenity is a beautiful movie.

This is surprising considering the plot for Serenity is a gritty outlaw western, set in a science fiction genre. But the reason why 4 out of 5 movie critics gives it a thumbs up (

) is the acting, cast chemistry, how much you as the audience come to care about the characters, even if you haven’t seen them before, and the fact that it is a classic tale retold with twists that point out the glaring clichés in other films and make you laugh. My how you laugh. And maybe cry too.

Like I said, you find yourself pulling for the crew of the Serenity. They are the underdogs. The outcasts. These are not the beautiful people. These are the people you generally pass in the streets and hope to ignore. These are the lower class trying to make a living on the frontier. This is their story. And like truth, they do not fare well.

Serenity, the movie is an struggling underdog too. It is a shame that like the crew of Serenity, this film isn’t faring well. It is playing to mostly empty theater seats. And that is a shame, because it means you will miss your chance to see a good yarn. That is a rare thing coming from Hollywood, as we experienced this summer with every tired, warmed over sequel, remake, and hack television drivel. Yes, Serenity is based upon the failed TV series, Firefly. But it was not a hack plot. It was a fresh perspective, that got a major motion picture studio to spend $40 million to bring the tale to the big screen. If you want to see a good movie for once, you had best hurry, because sadly, even with the very good reviews, Serenity won’t be around much longer.

Would I say this is a must see? No. Would I say this was a B+ should see. Absolutely. Good movie to take a date, because there is plenty to keep your girl shedding tears while you watch the action.

For a link to a synopsis of Serenity, without spoilers see:

Where the Divide in Star Wars Mirrors the Culture War

A Glitch in the Matrix - Official Trailer