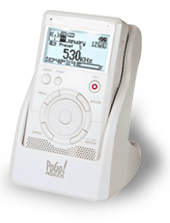 With all the MP3 players out there in the market it’s hard to tell what’s what or what the difference is between them. Even HP tried to hop on the bandwagon but was unable to come up with there own player so instead opted for a brief time to put out an HP iPod. This didn’t go over as well as they anticipated. Now however the PoGo picks up where the iPod leaves off. This light weight, easy to use portable MP3 player packs quite a punch. Not only does it play your favorite MP3s collected from the internet but the built in AM/FM tuner is a great way to MAKE your own MP3 of your favorite radio programs. Let’s say you’re a closet liberal and you can’t catch Randi Rhodes because the office just doesn’t understand. Set the timer on your PoGo and catch it on your own time, or get a car adapter to listen on the way home. The PoGo not only records from the AM/FM tuner but there is a built in Mic and even a line-in. Having this opens the door to unlimited amounts of things you can make your own MP3 recordings from (tapes, phonographs, anything you can get an adaptor for).

The PoGo’s 128 Megs of memory isn’t anything to write home about but the PoGo does come in a 512 Megs model. Depending on the quality of the recording you make you can store a little over 8 hours of radio recordings on the 128 version. On the plus side there is an SD Memory slot and with the price of the memory cards dropping weekly you are technically are not limited to the amount of memory available unlike the iPod. With the abundance of additional features and built in speakers the PoGo is one of the best players out there in the market today.

Battery life is listed at 15 hours but since the USB connection also recharges the internal battery it has yet to die on me. I also like that you don’t need any additional software (if you’re running Windows XP) and that the PoGo shows up as a removable drive. This is another nice feature for taking files back and forth to the office. The PoGo’s screen is nice, bright and easy to read. Buttons are well placed on the PoGo with the volume control on the side and the navigation controls on the front. Easy to use in both the right and left hands the PoGo weighs only 3 ounces and is easy to travel with. There is so much you can do with this one little unit. Even wearing it with the included neck strap makes it feel like a backstage pass.

This little box is like the Swiss-army knife of digital players. It has lots of rarely scene features in a digital player. No moving parts making it super light, incredible recording capabilities, and the built in speakers lets you review your recordings with your friends.

Pro: Record from virtually anything, lightweight, easy to handle and use. Great battery life, click and drag songs from your PC directly to the PoGo.

The traffic light gets a dazzling, 21st century makeover

PC Operating Temperatures: How Hot Is Too Hot?