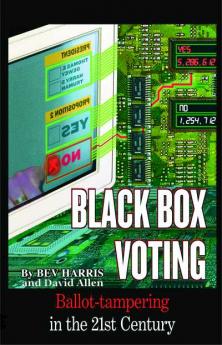 Guest Blogged by John Gideon of VotersUnite.org Election Fraud in Florida? Ohio? Chicago? Not this time…How about Maricopa County, Arizona, the fourth most populous county in the United States. Yes...

Election Fraud in Florida? Ohio? Chicago? Not this time…How about Maricopa County, Arizona, the fourth most populous county in the United States. Yes, sunny, laid back Arizona seems to be a hotbed of electoral intrigue, dispute and possible malfeasance.

It seems that the results of the September 7, 2004 Republican Primary now has Republicans turning on and challenging fellow Republicans in both the state legislature and in the media. Also emerging are stunning reports that county jail inmates -- some of whom have admitted to ballot tampering! -- were being used to handle ballots in the county in exchange for early release!

In an article in the Phoenix New Times out today -- headlined "Pandora's Box - Is Arizona's Speaker of the House afraid of what might happen if the truth is learned about a local election?" -- reporter John Dougherty tells a tale of apparent election fraud, a quid pro quo offer, new votes that appear like magic, failure by an assistant county attorney to serve a subpoena, political pressure, and one hell of a mess.

The story covers the strange tale of Maricopa County District 20 Republican Primary state Representative candidate, John McComish who went from four votes behind rival Anton Orlich, after the primary votes were counted, to 13 votes ahead after a recount held on September 21, 2004. In between those two counts 489 new votes mysteriously appeared in the totals.

The incident led to a date in court (that's what Republicans do when they don't like the results of elections…too bad more Democrats don't take the cue) for which the Assistant County Attorney neglected to serve a subpoena on the Election System and Software (ES&S) representative who has an office in the county elections offices. The lack of a witness from the major American Voting Machine company to answer questions about potential machine malfunctions that resulted in the unexplained new votes forced the judge to go ahead and certify results of the election according to the recount. The county Election Director could provide no explanation that made any sense as to where those 489 additional votes came from. Freedom of Information Act requests for records from the County Sheriff -- who was supposed to provide guards for the ballots -- have been ignored…

Meanwhile a Republican State Senator announced, earlier this year, that a hearing by Arizona's Senate Government Accountability and Reform Committee would be held to investigate the election, handling of ballots, and other failures by the county and county officials. Then on June 16, state Senator Jack Harper, was called on the carpet by the powerful Speaker of the House, Republican Representative Jim Weiers. Every indication, including witness statements, is that Speaker Weiers offered Senator Harper a job with the state Republican Party if he would drop the investigation. Apparently Senator Harper had an unusual respect for ethics because he declined the offer and is going forward with the hearings. When asked about the job offers, Senator Harper told the Pheonix New Times, "Well, I'll just say to you that I can't be bought or intimidated," Harper said." And I will leave it at that."

The New Times also reports that the Democratic candidate for the District 20 seat, Jim Torgeson, was very interested in the race because he felt he had a better chance of beating Orlich in the general election than he did McComish.

Torgeson, who ran as a Democrat for the House in District 20, told me that a few days after the September 7, 2004, primary, he asked Robson how the recount would be conducted. Robson had already won one of the two House seats up for election in the District 20 Republican primary.

Torgeson said he was very interested in the outcome of the recount because he felt he had a far better chance of defeating Orlich in the general election than McComish. Torgeson said Robson told him not to expect Orlich to be his opponent.

"[Robson] said he could virtually guarantee it would be McComish," Torgeson said.

"I thought it was weird," Torgeson says, "How did he know that?"

While compiling a report on the details of the District 20 discrepancies between the vote count and the recount, VotersUnite.org has also learned that inmates from the Maricopa County Jail have handled over a million early ballots since 1998! Including tens of thousands during the now-contested 2004 Primary Election!

An article last November in the New Times outlined admissions of ballot tampering by inmates handling early ballots during the 2004 Primary:

The arrangement of inmates handling ballots is "particularly troubling," according to one source close to the investigation. "Inmates were informed that participation in ballot handling was tied to possible early release," the source has informed The BRAD BLOG.

According to the source, Maricopa County Sheriff Joe Arpaio was also a candidate during the same Republican Primary Election and had personally endorsed the come-from-behind-after-the-mysterious-recount winner, John McComish, in the District 20 race.

No public documents indicate that inmates handled District 20 ballots between the original count and the recount. However, our source tells us that Maricopa County has yet to provide all of the documents related to its investigation, despite several public information requests.

"It's hard to tell whether they are covering up incompetence or fraud," says Jones, who has studied the District 20 situation extensively. "And it's hard to come up with a hypothesis that doesn't include, to some degree, one of these things or the other."

Is all of this just an issue in District 20 or is it indicative of a more widespread problem in Arizona and elsewhere? And why is the Speaker of the Arizona House of Representatives so anxious to avoid an investigation in the matter?

The story looks to be far from over as both BRAD BLOG and VotersUnite.org will be continuing our investigation into the matter…

Mike Lindell: 23,000 Votes Came From One Address In Wisconsin!