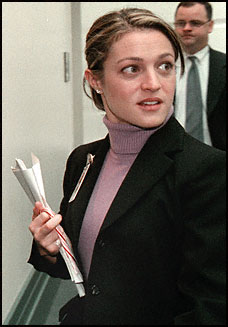 Michael Scanlon found himself at the center of one of the biggest political scandals in Washington history as a result of cheating and lying—but not the type involving the numerous clients he was paid to lobby Congress for, former coworkers and friends of his ex-fiancee say.

Scanlon was implicated in the Abramoff scandal by his former thirtysomething fiancee, Emily J. Miller, whom he met in the late 1990s while working as communications director for former House Majority Leader Tom DeLay (R-TX), three former associates who worked with Scanlon at DeLay’s office said. Colleagues say Miller went to the FBI after Scanlon broke off their engagement and announced his intention to marry another woman.

Miller did not return a call seeking comment. Scanlon’s attorney, Stephen Braga, did not respond to phone calls or emails seeking comment. Former coworkers of Scanlon and Miller at DeLay’s office and of Miller at the State Department would speak only under condition of anonymity, saying they did not want to be called as witnesses in a trial.

In 2003, Miller left DeLay’s office to work at the State Department. Scanlon departed too, partnering with now-indicted conservative lobbyist Jack Abramoff in lobbying for an array of Indian tribes. As Scanlon’s star rose, troubles between the couple mushroomed.

In May 2004, Miller found herself at the center of attention when—while live on air—she ordered a cameraman for NBC’s Meet the Press to stop filming Colin Powell. A copy of the transcript shows Miller, who also used to work as an NBC staffer, as a brusque press aide. Powell eventually ordered that the interview continue and asked Miller to step aside.

What many people didn’t realize at the time, however, is that during the Powell interview Miller was upset because her fiancee, Michael Scanlon, had broken off their engagement, two of Miller’s former State Department co-workers said. While still engaged to Miller, Scanlon had started an affair with a manicurist and broke up with Miller because he planned to marry the other woman, three of Scanlon’s former associates at DeLay’s office said. They added that the two had numerous public arguments.

But Miller had something on Scanlon. He confided in her all of his dealings with Abramoff, former colleagues said. She saw his emails and knew the intimate details of his lobbying work—work which is now the center of a criminal fraud investigation. After the breakup, Miller went to the FBI and told them everything about Scanlon’s dealings with Abramoff, her coworkers added.

In turning him in, she became the agency’s star witness against her former lover. Scanlon pled guilty in November and is cooperating with prosecutors; Abramoff reached a plea agreement today.

Scanlon's former colleagues did not speak warmly of him, saying he was not a very likable person because of the way he treated others, and that he later became flamboyant with his newfound wealth.

Aside from the Powell interview, Miller also attracted attention after berating a Washington Post Magazine reporter. In 2001, while Miller was working as press secretary to DeLay she told a reporter who was writing a profile about DeLay. "You lied! . . . You betrayed him! You twisted his words! . . . We don't know you. You don't exist. . . . You are dead to us."

A DeLay spokesman told the Post at the time, "Tom thinks Emily did a fine job for him."

1 Comments in Response to How they got caught: After lobbyist broke off engagement, ex-fiancee told of illicit dealings to FBI

Did she know at the time she chose to strike out at Scanlon that she was killing off her Washington career? Was she rash? Or perhaps she was already disheartened with what she had seen of the true nature of the game she was a player in? Hmmmmmmm. One wonders if she has been talking to other federal prosecutors about DeLay as well.

One thing's for sure,...she'll never work in that town again.