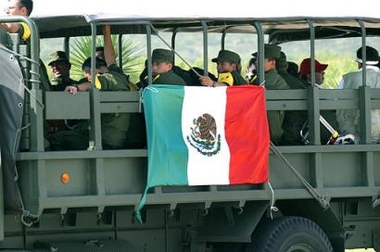 (SCOTTSDALE, AZ) January 20, 2006 – The Minuteman Civil Defense Corps (“MCDC”) announced the release today of video footage of an incursion by a unit of the Mexican army across the U.S. border in Arizona.

The Mexican soldiers started running back through the brush to Mexico when they realized they had been spotted.

The video shows a uniformed Mexican soldier climbing through a barbed wire fence on American soil to return to the Mexican side of the border as he races to catch up with the other Mexican soldiers who had also climbed back through the fence as they retreated back into their country.

The soldiers raced up a hill to a group of abandoned buildings at a ranch where military transport vehicles with more soldiers were located.

A group of armed Mexican soldiers then returned to the barbed wire fence (on American soil) and confronted Simcox and the volunteers. A discussion in Spanish ensued, with the agitated soldier ‘in charge’ saying the Americans had no business being there.

Simcox and the volunteers did not budge. The Mexican soldiers left and drove off. Judging from earlier activity observed at the ranch that morning, Simcox is of the belief that a trafficking operation had been disrupted by the volunteers.

The footage, filmed in 2004, was sent to then Secretary of Homeland Security Tom Ridge. His office did not respond. The video has remained in the Minuteman video archive and is being released in response to recent news reports that over 200 cross-border incursions by the Mexican army have been documented since 1996.