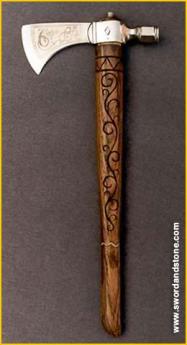 I’ve been to the Barrett-Jackson car auction/show a few times this week (media passes and lots of friends that want to go). Lots of great stories about great cars and high bidding (There is this one Conv. Impala ’66-’68 that really had my eye) but there are many vendors as well that have wares that only the wealthy (in large abundance at Barrett-Jackson events) could afford.

One of the vendors is “Starabilias”. Starabilias has retail locations at Disney World, Disneyland Resorts and the Trump Taj-Mahal www.starabillias.com

. There was a lot of cool stuff selling for over $10,000 (Star Wars original posters signed by the actors and director – the handgun from this movie – the jacket from that movie etc.)

The item that caught my eye was an item from the movie “The Patriot” with Mel Gibson. I remember seeing this movie while at the 2000 National Convention of the Libertarian Party. A large group of libertarians went on opening weekend (then the next day we wore kilts with our faces decorated in blue during the nomination process for president). The scene in the movie that was causing all of the media buzz was when the British took ‘Benjamin Martin’s’ son to be hung after killing another son in front of their home, Benjamin (Mel Gibson) took two of his younger sons through the woods to set up an ambush to rescue his oldest son (Heath Ledger – Now in Brokeback Mountain and Casanova….. very weird combo,… yuk)… anyway…. The media ruckus was about showing pre-teens killing Redcoats. Even though this is certain to have happened on more than one occasion in every war, the press didn’t seem to want that scene in the movie. The rescue battle scene was very good and featured the use of a Native American Tomahawk that was the signature weapon of ‘The Ghost’ (Gibson). This Battle Axe is to “The Patriot” what the star Broadsword is to “Braveheart”.

It Battle Axe from “The Patriot” (with all of the documentation and display ‘stuff’ that comes with it) is on sale for $2995.

I thought of raffling it off on the Internet to those interested and having the drawing at the Freedom Summit this coming November, but I seemed to be the only one that thought it a good idea at that price and I don’t have an extra $3000 lying around.

Soooo, anyone interested in this particular piece can take advantage of it, Good Luck.

Harrison Ford, 79, 'returns to filming Indiana Jones 5' after being forced...

Clint Eastwood, 91, returns to the big screen for the first time in three years...