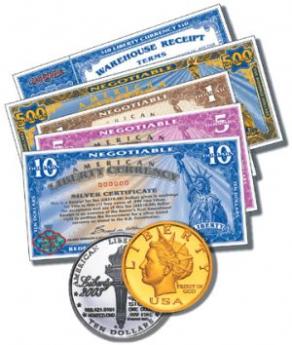 No tossup regarding legality of Liberty coins

Southtowns businessman Daniel Buczek said he has had "no trouble" using Liberty silver dollars to buy coffee, oil filters for his car and other items at a number of area businesses.

But when someone in his family tried to use them to buy beer at a Buffalo Sabres game, Buczek and his son wound up in trouble with the law.

Buczek, 55, and Shane Buczek, 34, both of Derby, are believed to be the first people to be charged in this region for trying to make purchases with the Liberty dollar, a privately minted $20 coin.

In fact, some businesses in the Southtowns told The Buffalo News they do accept the currency.

Liberties, as the coins are called, are viewed by some people as an alternative to the U.S. government's monetary system. The organization that makes Liberties claims that more than $15 million worth are in circulation throughout the nation.

"We weren't trying to break any law," Daniel Buczek said. "We weren't passing counterfeit currency. We use Liberty silver dollars because they are backed by silver, and I believe the American monetary system is going to collapse."

According to police, the Buczeks were arrested after they tried to buy beer with $20 Liberties from "numerous" vendors at the Dec. 26 Sabres game against the New York Islanders at HSBC Arena.

Acting on a complaint filed by a security officer at the game, Buffalo police charged the two men with felony counts of criminal possession of a forged instrument and criminal impersonation. A misdemeanor count of harassment was also filed.

The two Buczeks deny allegations they pushed and shoved the security officer, Edward M. Cotter, an off-duty Buffalo Police detective. They also deny allegations that Shane Buczek pulled out a badge and falsely identified himself as a federal agent.

Erie County District Attorney Frank J. Clark said the felony charges will be reduced before the case goes to trial at City Court. The trial is tentatively scheduled for Thursday. The two men should not have been charged with felonies, Clark said, but he added his office will pursue charges of attempted petit larceny and misdemeanor criminal impersonation.

"I was investigating complaints made by beer vendors all over the arena," Cotter said. "The vendors said these people were trying to make them accept these silver coins, and getting very pushy about it. They were telling the vendors, "Hey, these coins are worth $100.' "

The Buczeks deny claiming the coins were worth $100. They said they spent 16 hours in jail after their arrests and were briefly questioned as suspected counterfeiters by the U.S. Secret Service. The two Derby men insist they never intended to violate any law.

"It was actually my daughter who was trying to buy the beer, but they charged us instead," Daniel Buczek said.

According to the Secret Service and a Washington spokesman for the U.S. Mint, Liberties are not cash. They are not made by the government and are not considered legal tender. The coins are made by an Evansville, Ind., organization called the National Organization for the Repeal of the Federal Reserve Act and the Internal Revenue Code.

"We did send an agent to question [the Buczeks], but we determined this was not a counterfeiting case," said Michael C. Bryant, special agent in charge of the Buffalo Secret Service office. "Counterfeiting is when someone illegally makes a copy of actual U.S. currency."

Liberties are not made by the government, are not legal tender and "the U.S. Treasury Department does not approve of it," said Michael J. White, a spokesman for the U.S. Mint.

No business is required to accept Liberties, White said, but he added there is no law preventing businesses from accepting Liberties for goods and services, if they choose to do so.

And according to Karl J. Reile of Elma, the regional distributor of Liberties, a small but growing number of area businesses are accepting them. He said the Liberty was introduced nationally in 1998. Reile has been marketing Liberties in the region for six years.

"There are business people who like the fact that it is backed by silver. They see the value in it," Reile said. "On the horizon, we see some incredibles crises involving the U.S. dollar. It only makes sense to protect your wealth by moving to gold or silver currency."

"About 20 of my regular customers use them. They pay me with silver, and they accept silver as change," said Daniel Hyman, owner of the Red Apple convenience store on Route 78 in Strykersville. "With inflation and government deficits, I see more and more people who don't trust paper anymore. Eventually, I hope the banks will accept Liberties for deposits."

"We take it at par with dollars," said Shawn Clawges, owner of Opener's Grille, a restaurant on Seneca Street in East Aurora. "They're a pretty coin, and they're backed by silver. It's a commodity that's going up in value, unlike the U.S. dollar."