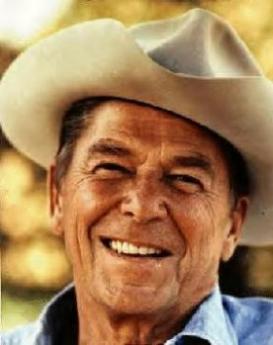 Special to the Sentinel

Although I am a Libertarian and not a Republican -- and fight with those who are more conservative than I would like -- I do pause for a few minutes to reflect on a man born 95 years ago this Feb. 6 whom I believe to be the greatest president of the 20th century.

When Reagan came into office, there were 14 income-tax brackets, the highest of which was a staggering 70 percent. In eight years, Reagan pushed through two massive income-tax cuts that led to only two tax brackets and a top rate of 28 percent. Many economists have pointed out that the past two decades saw unprecedented economic growth and increasing government tax revenues due to the efforts of Reagan to free Americans from the shackles of the Internal Revenue Service tax code.

In addition, Reagan is also largely responsible for freeing hundreds of millions of citizens around the world from the grip of communism. If we believe Mikhail Gorbachev, Reagan played a far greater role in the demise of the Soviet Union than people give him credit for. With 45,000 nuclear weapons aimed at the U.S. and Western Europe, Reagan used his brilliant negotiating skills, faith in American technology and understanding of the economic struggles facing the USSR as a tool to force the Soviets to give in to virtually all of his requests. By the time he left office, much of the tyrannically controlled eastern half of the world was on the course of freer markets and freer republics.

When we consider that during the past 276 months, the United States has had merely 15 months of recessions and a robust 43 million jobs have been created, we should ask: How many recessions would we have had if not for these historic tax cuts and expanded free trade with nations that were formerly closed off to the world?

For such liberty, Reagan should never be forgotten. However, he did make one colossal mistake that threatens to undo much of his work.

On April 10, 1980, George H.W. Bush -- a rival of Reagan's for the Republican presidential nomination, was asked his view of Reagan's tax-cutting agenda. Bush called the idea "voodoo economics," and the term stuck with Reagan's critics.

Many have observed that on both economic and foreign-policy issues, Reagan did not view the elder Bush as strong enough to push liberty forward. Yet, Bush Sr. was a moderate voice from Texas. Reagan selected Bush as his running mate to help balance the ticket. The rest is history.

The first Bush presidency gave us the second-largest tax increase in our history along with a dramatic increase in expensive regulations of American businesses. Moreover, his tax hike began an era of increases in the number of tax brackets, which now total six.

These policies contributed greatly to the 1990-91 recession. In addition, the U.S. military set up shop in Saudi Arabia, which fueled hatred and resentment in the Arab world.

Real conservatives should understand that our current president is not much different from his rather ineffective father. Yes, George W. Bush has cut our taxes -- twice. But if Republicans are honest, they must admit that non-military government spending has increased at a faster pace under George W. Bush than under any president since Lyndon B. Johnson.

Overseas, Republicans should also find reasons to grimace. Instead of expanding liberty around the world by humbly showing people the moral superiority of freedom as Reagan did, the younger Bush has contributed to the notion that the U.S. is the imposer of our definition of freedom.

I wonder if Ronald Reagan would have approved of the Patriot Act, runaway spending on seemingly every program that hits his desk and foreign wars where the enemy has not yet been identified.

Yet, before we blame too much on the three terms that men named Bush have occupied, we should also ask:

Where we would be if Reagan had never picked the first Bush to begin with?

Jack A. Chambless is an economics professor at Valencia Community College.