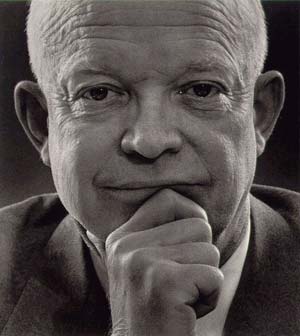 Let the movie preview load before entering site (audio on) then explore the site. Make sure to watch the movie trailers.

WHY WE FIGHT, the new film by Eugene Jarecki which won the Grand Jury Prize at the 2005 Sundance Film Festival, is an unflinching look at the anatomy of the American war machine, weaving unforgettable personal stories with commentary by a “who’s who” of military and beltway insiders. Featuring John McCain, William Kristol, Chalmers Johnson, Gore Vidal, Richard Perle and others, WHY WE FIGHT launches a bipartisan inquiry into the workings of the military industrial complex and the rise of the American Empire.

Inspired by Dwight Eisenhower’s legendary farewell speech (in which he coined the phrase “military industrial complex”), filmmaker Jarecki (THE TRIALS OF HENRY KISSINGER) surveys the scorched landscape of a half-century’s military adventures, asking how – and telling why – a nation of, by, and for the people has become the savings-and-loan of a system whose survival depends on a state of constant war.

The film moves beyond the headlines of various American military operations to the deeper questions of why – why does America fight? What are the forces – political, economic, ideological – that drive us to fight against an ever-changing enemy?

“Frank Capra made a series of films during World War II called WHY WE FIGHT that explored America’s reasons for entering the war,” Jarecki notes. “Today, with our troops engaged in Iraq and elsewhere for reasons far less clear, I think it’s crucial to ask the questions: ‘Why are we doing what we are doing? What is it doing to others? And what is it doing to us?’”

Harrison Ford, 79, 'returns to filming Indiana Jones 5' after being forced...

Clint Eastwood, 91, returns to the big screen for the first time in three years...