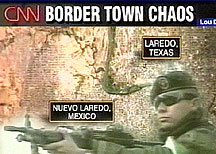 (SCOTTSDALE, AZ) January 24, 2006 – Chris Simcox, President of the Minuteman Civil Defense Corps (“MCDC”) today expressed outrage over the incident yesterday in Texas when heavily armed Mexican soldiers were allowed to retreat to their country after being caught in a massive drug smuggling operation inside the United States.

According to reports in the Inland Valley Daily Bulletin, the FBI and the Hudspeth County Sheriff’s Department have confirmed that Mexican Army troops armed with mounted machine guns accompanying civilian drug smugglers were confronted by federal and local law enforcement officers several hundred yards inside the United States near Neely Pass on the Rio Grande. Hudspeth County Sheriff Arvin West held a press conference earlier today about the incident.

The retreating Mexican soldiers and the civilian smugglers abandoned a Cadillac Escalade (that was stolen in the U.S.) loaded with over 1400 pounds of marijuana. The Sheriff’s department confirmed reports that another drug-laden SUV which got stuck in the river was set ablaze by Mexican soldiers.

Sec. Chertoff, responding last week to reports of more than 200 such incursions by the Mexican Army over the past ten years, downplayed the incursions, calling the reports “overblown.”

Hudspeth County Deputy Sheriff Mike Doyal was quoted in a report by the Inland Daily Bulletin report saying, “Our government has to do something," he said. "It's not the immigrants coming over for jobs we're worried about. It's the smugglers, Mexican military and the national threat to our borders that we're worried about."

MCDC President Simcox issued the following statement on the armed incursion by the Mexican Army:

“The politically correct policies of President Bush, Sec. Chertoff and Gov. Perry regarding our border are going to get Americans killed – by Mexican soldiers, drug smugglers or al-Qaeda terrorists. These office holders seem to be more afraid of offending the government of Mexico than protecting the lives of American citizens.

“American troops, whether regular Army, National Guard or state militia under the authority of Gov. Perry, need to be deployed immediately to secure our borders.

“Sec. Chertoff recently said reports of such incursions by the Mexican Army were ‘overblown.’ He should resign his post, as he clearly has no intention of taking these incursions seriously. If heavily armed members of the Mexican Army are crossing the border with with impunity guarding drug shipments, what’s to stop al-Qaeda from doing the same with weapons of mass destruction?

If You Thought The Classrooms Were Bad, There's a More Toxic Strain of Critical Race Theory ...