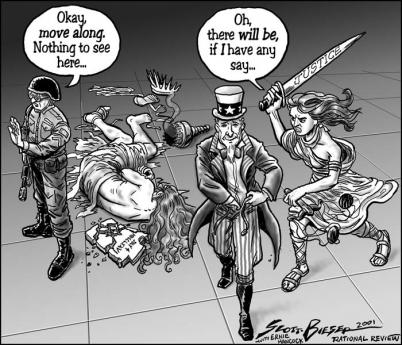 Last evening, Cindy Sheehan was arrested in the House gallery of the U.S. Capitol building - just prior to George Bush's "state of the union" harangue - for wearing a T-shirt that read: "2245 Dead. How many more?" As soon as her message was seen, a capitol gendarme screamed "protestor!," dragged her from her seat, took her outside where she was handcuffed, taken to police headquarters and charged with the crime of unlawful conduct.

This may serve to disabuse those who still cling to the naive sentiment that the Constitution has anything to do with protecting individual liberties and restraining government power. Even within legislative chambers, silent protests of state action are criminalized. The Capitol building must be immunized against any expression of dissent. It will, of course, be argued by the statists that even silent messages are disruptive of the pageantry going on below. But this concern did not prevent politicians, government officials, and other gallery attendees, from erupting into paroxysms of cheers and applause whenever il duce managed to complete a coherent sentence. These marionettes, responding to their cues, were encouraged to go into their collective frenzies on behalf of the words of a president who has openly defied the Constitution and statutory mandates, and - on a number of occasions - expressed his preference for being a dictator. Ah, but let a lone American silently express a differing point of view, and shrieks of "protestor!" and handcuffed trips to police headquarters will ensue.

FINAL WARNING: It Is 1938 and They Are Coming for All Conservatives

College Made Me Conservative