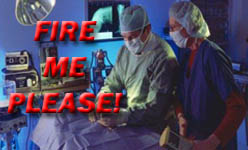 On Jan. 3, 2006 at 2:50 AM, our brother, Robert Eldon Burwell died at Maryvale Hospital, on 51st Ave., in Phoenix, Arizona. He is survived by, myself, Beverly Calvert, his brother, James Burwell, and 2 other sisters, Betty Leady and Carol Putnam.

Bob was born a “slow learner” in 1936 and moved with his mother from Bowling Green, Ohio to Phoenix in l957. Bob never married nor had any children. He did not have a driver’s license, so he rode his bicycle wherever he went. He was able to obtain a job as a bagger at a supermarket. He worked there for many years until he was laid off and then went to work at a car wash on Indian School Road. Our mother died in 1981 and he lived alone for about 20 years. Our mother had set up a trust so that Bob could live in the house until his death. In 1998, the new owners of the car wash reduced his hours and he was not able to pay his bills any longer.

When we (Carol Putnam and I) discovered the desperate situation he was in, we applied for Social Security Disability in 1998. His application was quickly approved and he started to collect Social Security disability in the amount of $378.31 a month. The checks were not sent direct to him, they were sent to our sister, “Carol Putnam, for Robert E. Burwell” since Social Security did not feel he was capable of handling his own money at that time. Carol Putnam has also been a resident of Arizona since l957.

During the next two years, Carol suffered heart and lung problems and was no longer able to work. She moved into the house with Bob and applied for disability and was approved because of her health. They were barely able to pay the monthly bills using both disability checks. They were approved for AHCCCS and Meals on Wheels.

Bob and Carol continued to have health problems and soon both of them were on oxygen 24 hours a day. Carol’s heath deteriorated quickly. She was in and out of hospitals on a regular basis for heart and lung problems. Bob’s health seemed to stabilize for a while.

However, Carol’s health never really improved and in June of 2005 she was admitted to the hospital. She spent the next 5 months in either a hospital or a long term care facility. She had 2 surgeries during this time, and when she came home, Carol was unable to walk more than a few steps at a time and was confined to a wheelchair when leaving the house.

In December 2005, both Carol and Bob came down with a virus, and Bob was taken to Maryvale Hospital with pneumonia around December 20th. He was put on a ventilator and given medication to keep him asleep. After a few days, he was taken off the ventilator and transferred to a regular room. Carol was told that he would be fine. His breathing became worse and he was transferred to ICU to be put back on the ventilator.

We believe that on Dec 23rd, 2005, Carol had difficulty breathing and was taken by ambulance to Maryvale Hospital. She was treated with antibiotics and breathing treatments and started to improve. She frequently called down to ICU to check on Bob and was always told he was doing fine. When she was able to get a nurse to wheel her down to see him, he was always asleep.

Before Carol was admitted to Maryvale Hospital, the doctors told Carol that Bob had developed a blood clot in his lung and they needed to do a procedure that would place a filter in his artery to prevent the blood clot from moving and reaching his heart. This procedure was done on 12/27/05. They also put a scope down his throat into his lungs to take a biopsy of a dark spot in the lung. After these procedures were done, Carol was told that Bob had suffered an “old” stroke.

Carol was released from the hospital on 12/28/05. When she went to the hospital a day or two later to visit Bob, he was awake but did not act like he recognized her and when she tried to touch him, he pulled away and acted as if he was afraid of her. His right side was paralyzed and his eyes were glazed.

On Jan 2, 2006 Carol had a meeting with two of the doctors. Her ex-husband, Phil Putnam, took her to the hospital and was present during the meeting with the doctors. The doctors talked to them for about an hour, explaining that a mistake had been made that would cause his death. When they inserted a “pick line or central line” (a multi line device inserted in the neck to give medicine and take blood, etc.), they mistakenly put it into an artery instead of a vein. This caused air bubbles to travel to his brain, causing brain damage. The doctors said they documented this in writing in Bob’s medical records. The doctors advised Carol to pursue this through the legal system since it would be considered a wrongful death. The doctors that talked with Carol and her ex-husband were Dr. Mojavarian (Not sure of the spelling) and Dr. Alhabach. Dr. Mojavarian is part of Phoenix Medical Group PC, 4550 N. 51st Ave, Suite 67, Phoenix, AZ 85031, (623) 815-7900. Dr. Hossam Alhabach is part of Maryvale Specialty Group, 4524 N. Maryvale Parkway, Suite 120, Phoenix, AZ 85031, (623)848-4490.

After Bob died on 1/3/2006, the Maricopa County Medical Examiners Office was contacted and they transported his body to the county morgue to determine the exact cause of death. The autopsy was performed on Jan. 10, 2006 and the cause of death was determined to be “Misplacement of Central Line”.

Mr. Isreal, a lawyer in Arizona who deals with personal injury cases, advised us that only spouses, children, and parents can pursue wrongful death claims in Arizona due to the Arizona Statutes.

It seems that, in Arizona, if a person dies a wrongful death, no one is held accountable if there is no surviving spouse, children, or parents to pursue a lawsuit.

What makes this even harder for us to accept is that in 1981 our mother died in this very same hospital. She was diagnosed with pancreatic cancer and was given one chemotherapy treatment. This one treatment caused her death. Her death certificate states the cause of death as a GI hemorrhage due to chemotherapy. One of the doctors ( I do not know his name) told me on the phone, that if he had it to do over, he would only give her 25% as much chemotherapy drugs as he gave her. We did not pursue any legal claim with regard to her death since we felt we could not prove it.

We are currently trying to obtain copies of all medical records and the death certificate, as well as the autopsy report. While these have been discussed with us over the phone, various circumstances have been cited as reasons we cannot get copies. As soon as all the tests are completed, and Bob’s body is cremated, we should be able to get copies of these records.

Our primary concern is for our sister, Carol. She depended on Bob’s social security check, along with her own, to pay the bills to continue to live in the house our mother provided. She now has an income of less than $700.00 a month. By anyone’s standard, this is well below poverty level. Bob’s wrongful death, while under the care of the doctors at Maryvale Hospital, has caused her to be placed in a desperate situation. If ever a sibling had a financial interest in the ongoing life of another, I believe this situation is it. Carol and Bob could only afford to live in the house our mother provided if they pooled their small income. Together, they were able to remain somewhat self sufficient financially.

The hospital has not made any effort to contact Carol. I suppose they do not believe that their mistake affected anyone, as Bob did not have a spouse, children or parents.

Due to the Arizona Statute that limits who can pursue a wrongful death claim, and doctors and a hospital that are not held accountable for their actions, Carol is left with, at best, an uncertain future.

1 Comments in Response to Hospitals often not held accountable, even when they admit they are cause of death.

i read the article and i go to maryvale specialty group on 4524 north maryvale pkway and im going to change doctors now that ive read about this story im 28 and i have a child to look after and im not ready to die myself. i have high blood pressure and they put me on different meds at the same time and i question if im taking too much or when i had what i think was side effects they told me it was anxiety. and that  medications i was taking together was fine and  wasnt the pills .