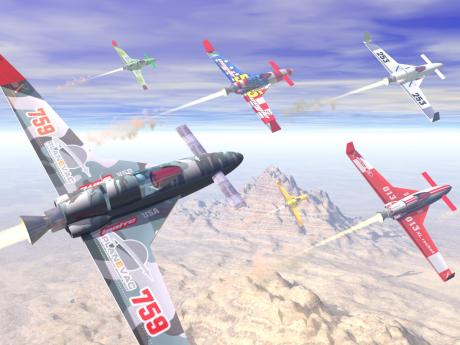 "We are honored and delighted to have been selected by the Rocket Racing League as its first team. The prospect of competing against our peers under rocket power through a virtual track in the sky is thrilling," said Robert "Bobaloo" Rickard, Chief Executive Officer of Leading Edge. "The roar of rocket power and a 20-foot trailing flame will redefine the concept of air racing."

In October of 2005, Robert "Bobaloo" Rickard and his longtime friend and fellow pilot, Don A. "Dagger" Grantham, Jr., formed Leading Edge Rocket Racing, LLC. Rickard and Grantham have a shared history of flying the F-16 Fighting Falcon and diverse backgrounds in business, consulting, consulting and engineering.

Rickard holds a degree in electrical engineering and served in the active duty Air Force for more than 13 years piloting the F-16. He has amassed 2,450 total flight hours and was awarded "Instructor Pilot of the Year" for two separate Fighter Wings while on active duty. Rickard is also a graduate of the US Air Force Fighter Weapons School, the most challenging and prestigious doctorate-level flying course in the world. He leads the Rickard Consulting Group, Inc., which provides technical expertise on a wide range of tactical flying programs in the public and private sectors.

Grantham is a graduate of the United States Air Force Academy and served as an Air Force F-16 Instructor/Evaluator Pilot as well as an Advance Agent for Air Force One. With more than 16 years of flying, Grantham has accumulated 2,000 total flying hours and has received a variety of awards at every phase of his career from wingman to flight instructor/evaluator pilot. In 2002, Grantham became one of only three officers in the history of the Air Force One Advance Agent program to be decorated for service above and beyond the call of duty. Currently, Grantham is co-owner and founder of five companies involved in a variety of enterprises including development of multi-use helmet technology. He is also the General Manager of a large Phoenix-based manufacturing company which he has led through two years of unprecedented growth.

"Welcome to the Rocket Racing League guys," said Sean Tucker, RRL Pilot. "Let's see if any of that F-16 experience will help you beat me."

About the Rocket Racing League

The Rocket Racing League is a sports and entertainment organization which combines the competition of racing with the excitement of rocketry. The RRL is dedicated to providing safe and thrilling experiences for families through live events, television broadcasts and interactive technologies. Co-founded by Dr. Peter H. Diamandis, founder of the X PRIZE, and Mr. Granger Whitelaw, two-time Indianapolis 500 champion team partner, the league's mission is to serve as a technology accelerator in the areas of airframe, propulsion and spacecraft design, and reach for the future to inspire the next generation of spaceflight enthusiasts.