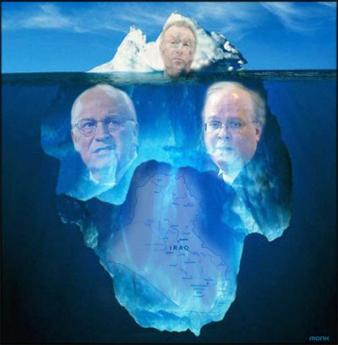 Dick Cheney told a federal grand jury that his superiors authorized him to give secret information to reporters as part of the Bush administration's defense of intelligence used to justify invading Iraq, according to court papers.

Special prosecutor Patrick Fitzgerald said in documents filed last month that he plans to introduce evidence that I. Lewis "Scooter" Libby, Cheney's former chief of staff, disclosed to reporters the contents of a classified National Intelligence Estimate in the summer of 2003.

The NIE is a report prepared by the head of the nation's intelligence operations for high-level government officials, up to and including the president. Portions of NIEs are sometimes declassified and made public. It is unclear whether that happened in this instance.

In a Jan. 23 letter to Libby's lawyers, Fitzgerald said Libby also testified before the grand jury that he caused at least one other government official to discuss an intelligence estimate with reporters in July 2003.

"We also note that it is our understanding that Mr. Libby testified that he was authorized to disclose information about the NIE to the press by his superiors," Fitzgerald wrote.

White House spokesman Scott McClellan refused to comment. "Our policy is that we are not going to discuss this when it's an ongoing legal proceeding," he said.

William Jeffress, Libby's lawyer, said, "There is no truth at all" to suggestions that Libby would try to shift blame to his superiors as a defense against the charges.

Libby, 55, was indicted late last year on charges that he lied to FBI agents and the grand jury about how he learned CIA operative Valerie Plame's identity and when he subsequently told reporters. He is not charged with leaking classified information from an intelligence estimate report.

Plame's identity was published in July 2003 by columnist Robert Novak after her husband, former U.S. Ambassador Joseph Wilson, accused the administration of twisting intelligence about Iraq's efforts to buy uranium in Niger. The year before, the CIA had sent Wilson to Niger to determine the accuracy of the uranium reports.

Wilson's revelations cast doubt on President Bush's claim in his 2003 State of the Union address that Niger had sold uranium to Iraq to develop a nuclear weapon as one of the administration's key justifications for going to war in Iraq.

"These charges, if true, represent a new low in the already sordid case of partisan interests being placed above national security," Kennedy said. "The vice president's vindictiveness in defending the misguided war in Iraq is obvious. If he used classified information to defend it, he should be prepared to take full responsibility."

In the summer of 2003, White House officials — including Libby — were frustrated that the media were incorrectly reporting that Cheney had sent Wilson to Niger and had received a report of his findings in Africa before the war in Iraq had begun.

In an effort to counter those reports, Libby and other White House officials sought information from the CIA regarding Wilson and how his trip to Niger came about, according to court records.

During the meeting with Miller on July 8, Libby also discussed Plame, Fitzgerald said. "Our anticipated basis for offering such evidence is that such facts are inextricably intertwined with the narrative of the events of spring 2003, as Libby's testimony itself makes plain," the prosecutor wrote.

Miller spent 85 days in jail for refusing to discuss her source.