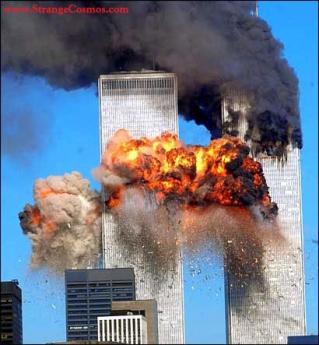 On Wednesday, February 1, a quiet, “churchy-looking” gentleman in a white shirt and tie walked into a packed auditorium on the campus of Utah Valley State College and electrified the room like a rock star. The 150-seat auditorium was filled to capacity, with every seat occupied, and people sitting in the aisles from the stage floor to the back of the room. Video cameras on tripods lined the back row. Two documentary-film crews were in attendance, in addition to the school’s camera crew, and various independent journalists. Seven “spill-over” rooms, with seating for 40-50 each, were also filled to capacity. On this very conservative campus (in the most conservative county in the most conservative state in the union), where community leaders pulled out all the stops in 2004 to prevent Michael Moore from speaking as part of his anti-Bush, pro-Kerry “Slacker Uprising Tour,” Dr. Steven Jones, this pious professor from the Mormon Church-owned Brigham Young University, calmly, gently, gave a simple physics lesson on the collapse of the World Trade Center buildings, the implications of which awed the audience with a sense of world-historical significance, and implied an indictment of the present administration so utterly devastating that it made Moore’s Fahrenheit 9/11 look like a Bush apologia.

Dr. Jones argues that the physics behind the government’s explanation of the collapse of the Twin Towers on September 11 do not make sense, and that a better (and perhaps only) explanation for their collapse was that they were demolished, exactly the way structural engineers bring down large buildings, by pre-positioned explosive devices set off in precise sequences. He argues that the 650 degree Celsius temperature of burning jet fuel would not have been hot enough to even bend the steel girders of the WTC Towers, let alone to melt or evaporate them, as recovered beams indicate. And even if it was hot enough to evaporate the steel, the towers should not have collapsed as they did, pancaking so perfectly into their own footprints. On the rare times when such structures have failed (always due to earthquakes), they have toppled over sideways. The towers would have had to have been perfectly sliced, at every point along a horizontal plane at exactly the same instant, for something even resembling a pancaking effect to occur. And even if they did somehow pancake perfectly into their own footprints due to a structural failure, they would not have done it in the time it took for them to collapse, falling at essentially the speed of an apple dropped from the top of one of the towers, with nothing between it and the ground but thin air. The steel and concrete in the floors that collapsed should have taken some measurable time to break, and thus slowed the collapse somewhat as it unfolded. And even if it did collapse, at super speed, phwack phwack phwack, floor by floor, as fast as an apple falling through the air, impelled by the weight of the decapitated structure above it, its solid steel frame severed like a head by a flaming guillotine, that does not explain the molten steel seen at the Ground Zero clean-up site many days after the event. What could have caused such heat? asked Professor Jones.

And on it went, point by point, for almost two hours. Nothing about the physics of “what we know” about 9/11 seemed to add up. And all that’s not to mention the mysterious collapse of the forgotten WTC-7, the third steel-frame building that imploded due to fire, not only that day, but in the history of architectural design--the building that was not hit by a plane, that was surrounded by other buildings equally impacted but structurally undamaged by the collapse of the towers, that, with no jet fuel or violent impact, but allegedly due to a small number of scattered “debris fires,” collapsed, pancaking perfectly into its own footprint, looking exactly like video images of buildings being demolished by pre-positioned explosive devices. Playing the one available video of WTC-7 collapsing at slow speed, Dr. Jones used his laser pointer to indicate the explosive “squibs” clearly seen shooting their way up the sides of the building as it collapsed from the top center down. He showed still images of similar micro-explosions on the sides of the Twin Towers, with steel beams clearly visible, ejected out of the sides of the buildings, ahead of the dust, blown out before the above portions collapsed.

It is a devastating presentation, and one could feel the disequilibrium of 150 minds reeling at once. The defining moment of contemporary American experience suddenly lost its definition. What is the meaning of 9/11? What really happened that day? If these things are true, the implications clearly point to some kind of “inside job” involving the government of the United States of America. (The Department of Defense, the FBI, and the CIA all had offices in the mysteriously collapsed WTC-7. Is it reasonable that outside terrorists could have infiltrated that building and filled it with explosives? ) If the WTC was brought down by pre-positioned explosive devices, somehow facilitated and covered up by the government, it would be the most audacious conspiracy in human history. When before have so many people been so spectacularly bamboozled, with so much death and destruction, and such massive implications for geo-politics? Never, that’s when.

And that is the problem Dr. Jones is facing with his research. People have knee-jerk reactions to “conspiracy theories,” at least to the ones that do not make it into their established and trusted news outlets. And the mainstream media, so far, despite a blip or two in the New York Times, is taking a pass on this story. Yes, my skeptical friends believe that the Bush administration cynically smeared the war records of both John Kerry and John McCain during the 2000 presidential election through the use of shill agencies. Yes, they believe there was suppression of black voters in Florida, and other schemes to cheat their way into the White House in the 2000 election. Yes, they believe the administration conspired to rig the intelligence they used to justify their invasion of Iraq. Yes, if they are regular readers of The New Yorker, they believe that the election fraud was worse in 2004, with rigged ballot machines, in Ohio in particular, being used to great effect. And, yes, they believe in massive wrong-doing and cover-up regarding October Surprise and the Iran/Contra affair, as well as the CIA-orchestrated overthrows of democracies in Chile and Iran, to name only two well-known examples. But no, they don’t believe in conspiracy theories.

These are hardcore leftists who refuse to even entertain the question of whether science supports the conclusion that the planes brought the towers down. “Too many people would have to know about it for them to get away with it,” one friend said. “They’re not that smart,” said another. “It’s just not plausible,” said a third. The issues raised by Professor Jones are not breaking along standard political fissures. People’s relative amounts of skepticism and credulity, rather than their political affiliations, seem to determine their openness to giving the professor’s analysis a hearing. Jones himself claims to have been a lifelong Republican, but now affiliates with no political party. The audience Wednesday night was definitely not the usual suspects of progressive professors and pierced and tattooed activists and students who regularly gather to share criticism of the President, although there were a few of those, too. Mostly, they looked like a cross-section of average middle-Americans. But by the end of the evening, it is no exaggeration to say that most had become political radicals, not of the left and the right, but of the right and the wrong.

If Dr. Jones’s work ever breaks into the mainstream media, and the rest of the country reacts the way the Utah County audience reacted, traditional political divisions will evaporate like steel beams exploded with thermite, and the whole lot of them, the Democrats and the Republicans, will be swept away, along with the military-industrial complex that has apparently managed to subvert the constitution of these United States and to con the American public, mesmerized by the shock of 9/11 and hypnotized by spell-binding incantations of freedom and patriotism, into going along with their mad plans for world domination.

Communications Professor Philip Gordon will be writing a story on the talk for MUJCA-NET. Look for it to be up in a few days at http://mujca.com

A BYU physics professor speaking on Wednesday night implied a government cover-up of what really happened on Sept. 11, 2001, and cast doubt on the blame placed on Osama bin Laden.

Professor Steven E. Jones suggested before the attacks the Bush administration was seeking a way to increase military spending and invade Iraq. The ensuing attacks on Iraq and Afghanistan have created most of Muslims' disdain for America, he said.

He spoke at Utah Valley State College to a packed lecture room, and by video to adjacent overflow rooms, sponsored by the Center for the Study of Ethics.