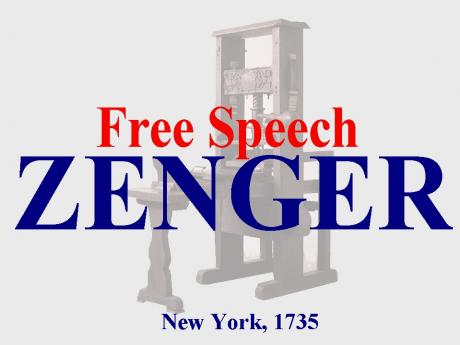 As Americans confront the grasping machinations of George W. Bush in regards to their rights we must recall why the Constitution would not have been ratified without each of those Amendments, but most especially the First Amendment.

Words, the truth, are the first defense against oppression.

It is the ideas thus enshrined that connect us to the truth of America's Mission Statement.

The Founders thought they had taken care of the issue of free speech as a tool for self defense. They remembered the case tried in New York forty years before that had proven the need for free speech.

The Case of John Peter Zenger had been tried in 1735 and its example had demonstrated to the Founders, who were certainly aware of it and its import, the nasty tendencies of government to use its power to stifle dissent and the truth.

Zenger, a printer doing business in the Royal Colony of New York that year, had had the audacity to print truthful information about the then Royal Governor, William Cosby, a pompous windbag fond of his perks. Cosby was then confronting political opposition to his predations and the abuse of the rights of the English subjects under his governorship.

Zenger was charged. He stood by his guns and spent eight months in what can only have been horrendous conditions in the New York jail before his trial. His wife ran the paper in his absence, keeping the case and its issues in the public eye. She missed only one issue while seeing to publication and caring for their many children.

The day of trial arrived.

The Royal Governor made his case; the printer had put into his paper the facts. The jury retired and found, as another jury had in the case of William Penn in England in 1670, that Zenger was not guilty. In the case of the New York jury this was because the truth is its own perfect defense. This action on the part of the jury enunciated into practice and custom the primacy of truth as a defense and the principle of jury nullification in the Colonies.

< http://www.chrononhotonthologos.com/lawnotes/penntrial.htm">The Penn Case, tried in London in 1670, had refused to convict for a crime because English juries had the right to consider the law as well as the case at hand, the basis for jury nullification.

Each case helped create the theory of American law and rights as we know them today.

When considering Bush and his assertion of 'inherent' executive privileges we should note that the only inherent rights involved belong strictly to the people, preceding all government. Bush is obviously misremembering something from grade school, doubtless the last time he paid attention in any class.

Zenger broke the law according to the statutes. He was found innocent because the law was unjust. His right to speak the truth was superior to all statutes. The truth was not to be abridged. Clearly, the Founders understood the potential for statutes to void the rights they protected within the Bill of Rights. Statute is always inferior to rights secured by the Bill of Rights and the natural rights of each of us as individuals.

So although most Americans do not even remember his name at this point in time we need to retell his story and appreciate the example and courage both he and his wife showed in facing down the forces of corruption and power in their lifetimes. Their courage, his expressed by speaking out and enduring incarceration, and hers by assuming his job on top of her own, was a gift to each of us.

As Americans we are facing a time when we will need to remember the courage and gifts that earlier adherents of freedom and justice have lent to us. We need to step up to the plate, assume duties that may be unfamiliar, and send our own message out to become precedent.

A free people who understand their rights refuse to bow down to oppression. The truth will be heard.