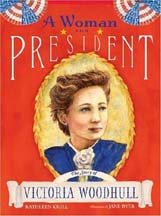 PETITION TO BAN WOMEN FROM BALLOT

The U.S. Constitution prevents Hillary Rodham Clinton -- or any woman -- from serving as President. Contrary to what feminists think, the 19th Amendment did not de-gender our nation's highest office. Article II, Section 1 declares 16 times the President will be a man.

Sexist? Maybe, but that's the law of the land. Don't think it's right? Then change it with a constitutional amendment. Until then, the U.S. Constitution bars women from the Oval Office.

Reverend Rusty Weller is conducting a petition drive to ban Hillary and all other women from gaining ballot access for the top of the ticket.

During his national Talk Show tour, Rev. Rusty explains that the 19th Amendment merely grants women the right to vote and he quotes chapter and verse: "The right of citizens of the United States to vote shall not be denied or abridged by the United States or by any State on account of sex. Congress shall have the power to enforce this article by appropriate legislation." Nothing in the 19th Amendment neutralizes the gender-specific qualifications for President, so much work must be done before Mrs. Clinton or any woman can constitutionally serve in that role.

“Most constitutional scholars agree our Founding Fathers specifically wrote into the Constitution a male-gendered office called President. Article II, Section 1 begins: ‘The executive power shall be vested in a President of the United States of America. He shall hold his office during the term of four years ...’”, said Rev. Weller.

To view the petition, visit: www.ChristianPetitions.com where it clearly shows that gender-specific qualifications for President are different than those for the office of Congressman in Article I, Section 1: "The House of Representatives shall be composed of members chosen every second year ... No person shall be a Representative who shall not have attained the age of 25 years ..." Neither is there any gender specification in the qualifications for Senator found in Article I, Section 2.

Said Rev. Weller, “The Constitution does not specify gender in its description of a Congressman. It's not a qualification for Senator, according to Article I, Section 2: ‘The Senate of the United States shall be composed of two Senators from each State chosen by the legislature thereof. ... No person shall be a Senator who shall have attained the age of 30 years, and been 9 years a citizen of the United States, and who shall not, when elected, be an inhabitant of that State for which he shall be chosen.’”.

“Yet four times in Article I, Section 7 the President is referred to specifically as a man. Twenty times in all the President's gender is mentioned as male,” Weller continued, adding, “The Constitution thus clearly states the President must be a man. That bars women from becoming the President of the United States without our nation first enacting a constitutional amendment.

“I personally have no objection to a qualified woman campaigning for and being elected President. But the Constitution must be honored and followed as written. It can be changed, if the public wants, through an established process.

Rev. Weller, 59, pastored three Southern Baptist churches before becoming an "Internet missionary" and serving as editorial director of both ConservativePetitions.com and ChristianPetitions.com the past three years. Rusty, who lives in the Dallas area with his wife of 35 years, Ellen, had a successful sports writing career out of the University of Oklahoma before moving to the corporate world as a message strategist for two "Fortune 500" companies. He was 39 when God finally got his attention, and Rusty was plunged into ministry after opening his heart to Christ. Between pastorates, God called him to rescue a series of weekly newspapers by including well-received Christian content. He served the Baptist General Convention of Texas as a communications consultant and web designer before directing the petition websites.