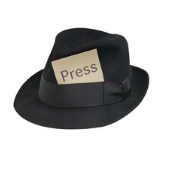 Why Journalists Get It Wrong

In a move virtually without precedent locally, the Phoenix Society of Professional Journalists chapter staged a meeting to examine, "Why Journalists Get It Wrong," at a quiet private location in the northeast valley.

Only about twenty attended the widely announced meeting, most of them working journalists or PIOs (public information officers, the current title for official government and private spokespersons).

The meeting began tentatively, with a moderator asking thoughtful questions of the four panelists -- a courts reporter (Tribune), copy editor/headline writer (Arizona Republic), TV news director (ABC-15 Phoenix), and the PIO for the Peoria police. By the end of the 90-minute session, the room was alive with honest, introspective discussion, looking into some of the darkest corners of the beleaguered journalism profession.

In the mild-mannered startup, the usual suspects were outed as reasons why mistakes occur. At this point, and to some extent throughout the evening, "getting it wrong" meant minor factual errors like getting names and dates wrong, or erroneous details contained in a piece. Be patient. It gets better.

The effects of shortening

One panelist, citing a well-respected study, noted that journalism is "chronically wrong," with, on average, every other story containing three errors. The focus was still on countable errors, and didn't yet get to the rotten underbelly part -- those core reasons why many people (some would say rightly) do not trust what the news presents these days.

As the audience and panelists warmed up to the subject, a dialog (multilog?) began to take hold. Personal reasons for not adequately pursuing a story began to emerge. The quotes below are paraphrases -- why feign accuracy when I have no recording and only hand notes and memory to draw from.

"I can't be rude, or force error checking."

"There's noting I can do if the PIO doesn't get back to me."

"I could get fired if I went that far."

"There is a culture of fear."

"Reporters come to the task without understanding of the basics, civics, or the subject."

About that "culture of fear" (a verbatim quote), it takes several forms. There is fear of management disapproval of verbiage, handling, decorum in the field. Also expressed was the editorial distaste for non-official sources. A statement from an official spokesdog is desirable, statements from anyone else is suspect, especially if it is a plain vanilla citizen. That's because the citizen's background and veracity are unknown. It's not clear how to contrast that against the PIO's veracity, whose background as a front for an organization is not only known, but shines in flashing neon.

Don't get me wrong, PIOs are a valuable resource, serve a purpose, and the man from Peoria PD seemed and was received as an exemplary example of how the role should be filled. Reporter reliance however, and an outfit's hiding behind its PIO, are at issue.

There was broad recognition of PIO stonewalling, and deep-rooted reporter fear of going around the PIO. Fear is also instilled in the hearts of an organization's people, by its leadership, to avoid the dangerous media. And it's getting worse, the crowd agreed. "I used to go through my Rolodex, call a contact, and get an answer. Now, it's, 'I'll have our PIO get back to you at some point.'"

How does a breathing and conscious journalist or editor take that for a reliable source? What you get there is a sanitized, dandified massage from the outfit you're supposed to be reporting on. Taking that, or standing there begging for it as many reporters apparently do, defines a lapdog, not a watchdog. And what's bad for the media is that the public can see this. When a story begins, "The White House announced today...", well, that's why they're called stories. Would transparency help? "We have no information beside what the outfit handed us." Or maybe, "We have in no way checked this wire service story before running it. If you find an error, just contact them."

- Journalists need more curiosity, because they often seem to lack any

- Journalists lack courage. They will piss off people if they report properly, and are unwilling to do so, so pabulum appears where the news is supposed to be.

- What used to be thought of as normal reporting is now the special and narrow category of investigative reporting. It turns out that investigative work is hard and has special requirements. You need more than one person and a non-deadlined period of time, to identify an issue, research it, dig, and report on what you find. These stories that really report (instead of "disseminating information") have to go through the anxiety-ridden lawyercoaster, often more than once, at huge cost.

Time ran out as the room really got into it, looking at fundamental issues like the lapdog-watchdog thing, the impossible constraints of business that must affect reporting (but which are routinely ignored so the objectivity flag can be waved with abandon).

With a little more time we seemed on track to reach the largest and deepest sources of error in the news these days, the part people are most responsive to, and that harms the profession's reputation more than anything.

The rotten underbelly of the beast

He-said she-said instead of research

We've got a long way to go. This was sure a good start.

"We publish the gun laws."

Call, write, fax or click for a free catalog.