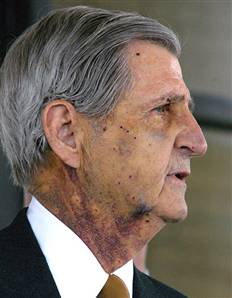 If I were some Shakespearean wannabe, I'd wax poetic about the parallels between Dick Cheney's shooting a man in the face and the entire history of the Bush Administration point to a comedy of errors heading toward tragedy. It turns out that I don't have to do so, because Newsweek beat me to the punch this morning.

The Newsweek story has it all: money, power, the story of a President who couldn't even be bothered to be curious enough to call his own Vice President to see if he was doing alright after shooting a man, and a Veep whose long history of press averse behavior rubbed the Washington establishment the wrong way...again...to churn up a continuing news cycle of innuendo, and day after day of failure to take responsibility until forced to do so by either Karl Rove or Mary Matalin, depending on which side of things you hear today.

Plus, Mrs. Cheney is apparently a diva (see page 3). (She's gonna hate that in print.) Lady MacBeth, eat your heart out.

There has been an undertone in every article coming out of DC on this shooting that really needs more discussion: just how much control, if any, does the President have over this Vice President?

According to the Newsweek article, the only way the White House got the skinny on what happened in Texas was when Rove called his long-time pal Katherine Armstrong late the night of the shooting. (Although the Veep did, apparently speak with David Addington, his Number 2, the President was relegated to the Junior Soprano nominally in charge role for the evening and not called at all.)

When Cheney's team called the Situation Room to notify them of a shooting, the little details like the Veep pulled the trigger, that he wasn't the one shot, or that a man had to be taken to the hospital as a result just weren't divulged. How bizarre is that? (Although O'Beirne seems to think this is a normal reaction (CrooksandLiars) , I think we can all agree that is just plain odd.)

Was this the Veep thumbing his nose at the WH -- or did he just not think that they would even care about the details? What kind of President doesn't even find out if his VP was shot or not until the next morning?

Hello?!? That's just plain crazy. And what sort of Veep withholds that sort of information from the President? These people aren't on the same team -- either that, or there is some sort of weird, detached, passive aggressive thing going on that I don't even want to know. Maybe someone with more of a psych background can explain this to me, but this whole miscommunication narrative is bizarre.

Newsweek raises the issue of the order to shoot down Flight 93 over Pennsylvania on 9/11 -- and how, apparently, the staffers of the 9/11 Commission and the Commissioners themselves still do not believe Cheney's version of events:

But a source close to the commission, who declined to be identified revealing sensitive information, says that none of the staffers who worked on this aspect of the investigation believed Cheney's version of events.

A draft of the report conveyed their skepticism. But when top White House officials, including chief of staff Andy Card and the then White House counsel Alberto Gonzales, reviewed the draft, they became extremely agitated. After a prolonged battle, the report was toned down. The factual narrative, closely read, offers no evidence that Cheney sought initial authorization from the president. The point is not a small one. Legally, Cheney was required to get permission from his commander in chief, who was traveling (but reachable) at the time. If the public ever found out that Cheney gave the order on his own, it would have strongly fed the view that he was the real power behind the throne.

With this shooting, that raw nerve has once again been exposed -- by Cheney, himself, this time in his "damage control" interview with Brit Hume, wherein Cheney claimed to have inherent declassification authority. If true, this would be a sea change of Vice Presidential power -- this authority has rested solely with the President, period -- and if true, this change has occurred in the absence of any public discussion or notification, which also runs contrary to American sensibilities on sensitive national security issues. (For a great review of this, listen to this NPR interview.)

Is this an accurate assessment of how things stand in the Bush Administration? Or is this another example of Dick Cheney grabbing the reins with both hands while thumbing his nose at "the boss?"

My gut tells me that the ripples of "Who is really in charge?" are going to keep making some waves. The Newsweek article has a few telling jabs -- but I'm not able to tell if they are coming from Rove or Andy Card in a couple of places. Either way, though, those jabs wouldn't be there if there weren't some concern that the President comes off looking less than in charge and less than engaged -- which pretty much sums up exactly how he comes across when you look into how incurious he was about the shooting. (Heaven forbid someone should wake the man up to give him news -- even important news like "your Veep just shot a man.")

And while we are at it, the portrait of Dick Cheney as so mean his own press people can't even ask him questions is lovely, isn't it?

Take a peek at this bit on how the President doesn't need Cheney for advice, that he's his own big boy now, and tell me if you aren't feeling the friction between the camps:

Cheney unquestionably exerted enormous influence on Bush in those early days. But Bush's aides say that the president has become less dependent on Cheney for advice, particularly in foreign affairs. The two men still have private lunches, but no longer every week. There are signs now that Bush listens to more-moderate voices on national security. On a range of foreign-policy crises, from Iran to North Korea, Cheney's forward-leaning posture has given way to the mainstream, multilateralist approach advocated now by Secretary of State Condoleezza Rice.

Mrrrrowr. Karl? Condi? Is that you? Or is this Bush himself, picking up the phone to plant a small dagger publicly, just to put Dead-eye Dick in his place? We are living interesting times...which may explain Mary Matalin's red claws and spin extravaganza on Timmeh's show this morning.

But it's going to take a lot more spin than she's shoveling out to put this genie back in the bottle. Who is in charge? I'm not even sure the President knows at this point.

The TimesUK has a good summary piece on the whole issue, raising some of the questions we've all had over the course of the week.