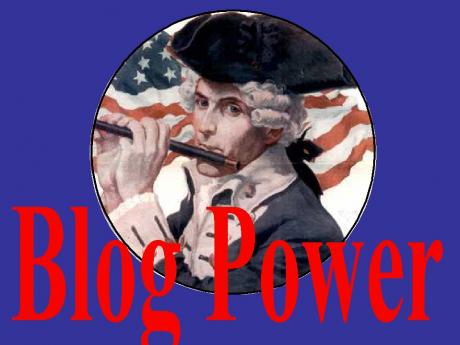 As you read this our government is ramping up a campaign of oppression against the heartland of America. Operation Cyber Storm, aimed directly at the right of free speech is ready to be deployed against all of us.

Bloggers are thus acknowledged as Americans last hope for freedom.

Bloggers have for years now shown their collective muscle of the mind and heart, changing the direction of government action in many instances, and exposing the corruption that is now endemic to every institution for which Americans pay so dearly.

Now the government has decided they must be silenced. It is time to fight back. We can return America to the governance of the people. In that battle bloggers are our first line of resistance.

The existence of those cantankerous bloggers whose on line discourse, diatribes, and insights annoy so many have become the last, best line of defense for the much tattered First Amendment. The rapidity with which bloggers change opinion has made them a force with which to be reckoned. Therefore this government under the speciously constructed argument of 'terrorist threat' is going after the Blogsphere.

It is time for those who truly care about America and our liberties as Americans to abandon the futile activities that replayed endlessly the activist organizing of the 60s. They no longer work.

Alito was confirmed. The Congress is stacked; the Supreme Court is frozen for the forces of big government and tyranny. At this point we cannot count on electing replacements because the ballot process has been hijacked. It is time to climb out of the box and take the offensive.

Bloggers are under attack. They need to be protected. Therefore, the ACLU needs to organizing task forces and action network so that any blogger who is attacked for free speech issues will get all the support needed to spring him or her while using each case to awaken the public to what is happening.

Think of it as the medical support we owe our military when, to protect us, they put themselves in harms way.

We have been divided, right and left, Green and Libertarian. These chasms are in large part fiction, constructed to prevent effective communication and a unified front for protecting the rights of individuals against the predations of the unholy alliance between megacorporations and government.

Decent people may have disagreements about how to get there but they all understand where we want to go. The rights of individuals as enunciated by Jefferson remain today the Mission Statement of America, more profound and compelling of our loyalty than any government or political party. How ever we live, as long as we do no harm to others, is ours to decide.

Political parties are tools we created to help us achieve the goals left uncompleted at the time of America's founding. Political parties were immediately used to oppose the full participation of each individual in that vision. Blacks remained in slavery; women dispossessed of their rights to their own property and to their bodies. Slavery, as Americans are beginning to see, comes in many kinds.

Where political parties fail because they have proven to be incapable of advancing the work of human emancipation they must be discarded. One of their most profound failings is in the divides they made possible. The redefinition of meanings, linking loyalty to words like 'conservative' instead of to the profound principles underlying America's Mission Statement worked to convert our rights, inherent and preceding government, to privileges, granted by government.

The change in definition that has helped create these divides is beautifully enunciated by R. J. Eskow in his article that appeared today on Huffington.com.

The solution is a working coalition and the way to make that work is to start working together to protect our first line of defense, a common problem, the coming persecution of Bloggers.

Our uniting agenda must include protecting Bloggers as the last bastion of free speech and the Internet as the village commons where opinions are aired, judged, and adopted through the process of persuasion and consent.

Left, Right, Libertarian, and Green; we have common cause and a common need. That need is urgent and compelling. We cannot yet guarantee an honest vote but we can support the warriors of the word who are out there in the trenches.

Blog Power: Celebrate the heroes among us, now carrying the flag for the First Amendment.