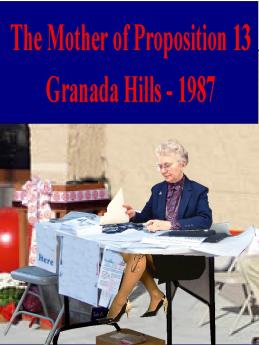 The shock of reading her property tax bill must have been tremendous. By all reports she lived not far from the Kmart in Granada Hills, California and had a fixed income. Along with that her only asset was that small house. She reportedly wondered if a mistake had been made; if a decimal had been misplaced on the bill. She had owned the small house for many years but this tax bill meant she wouldn't be living there very much longer; unless she did something.

So she took a roll of drawer lining paper down to the Kmart at the corner of San Fernando Mission and Balboa Blvds and, seated at her dilapidated little card table, began collecting signatures. People pulled out their own pens when hers disappeared. They were all in the same boat.

I would tell you her name if anyone knew what it was. They don't. Over the years I have wondered about her and silently thanked her for her insight and courage. She saved me, too.

The Mother of Proposition 13 lingers in anonymity along with who ever it was who fired the shot heard around the world. Every April 19th I think about the person who fired that gun. And I think about the courageous lady from Granada Hills. Both were heroes. But in the lady's case, we know what she meant to accomplish and we know that, despite not receiving any of the glory, money or power that accrued to those who grabbed the motley little movement that eventually resulted in Proposition 13, she accomplished her objective. We can only hope that relief came soon enough to ensure that she stayed in her home.

Today we associate Proposition 13 and the subsequent tax revolution in California that swept across the country with Howard Jarvis and Paul Gann. But they were late adherents, coming in after the fact of our lady's desperation had launched so many ordinary people into political action.

They got the glory. But the credit is hers. April 19th is again approaching. If you live in California; if you were able to keep your home because of Proposition 13; if you are appalled and horrified over the waste and abuse of government, think of her then. Light a candle. Volunteer time to a cause in which you believe.

Desperate people look for solutions to their problems. Sometimes they declare their own small revolutions and those movements catch the fire of our imaginations and change the world.

We live in a world threatened with terrorism. We live in a world fraught with a drug war that is destroying our children and our security. We are living on the edge of an abyss we did not even suspect existed.

On April 19th this year think about your own revolutions of the mind. Human problems have human solutions - if you are desperate enough to find them.

Rmember, heroes come in all kinds.

Why the New York Stock Exchange Could Soon Flee the State

States Are Now Wrestling With The Biggest Budget Crisis They Have Faced In All Of U.S. History