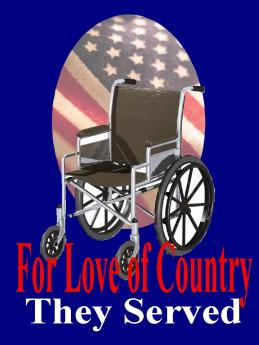 ''We pray that God will bless and receive each of the fallen, and we thank God that liberty found such brave defenders,'' President Bush on the first casualties from the War in Iraq. (Hypocrisy comes in all tones and flavors. Here is some of the Republican kind. Democrats are no different but just now they are less abuse-abled.)

Rene needed a wheel chair for her son, a Vietnam Vet who is confined to a care facility because he is a paraplegic. The Veterans Administration told Rene they could get her a wheel chair she could lift. It would just take five years. Five years before Rene, an elderly woman, could hope to take her son on outings since she could not lift the chair that the VA had provided.

Cuts by Congress have immediate impacts on the lives of Americans who have given the best of their lives to their country.

Rene cried. She knew that in five years she might well be dead.

When our soldiers put their lives on the line our debt does not die with the 21-gun salute. We are a wealthy nation and their service exacts an obligation of honor from each of us.

Soldiers have families who need to survive while those they love are in danger of death. While so many are at risk doing the bidding of their government the Congress that sent them is voting to cut $24.7 billion for veterans’ medical care, disability compensation and other benefits and congratulated themselves on their thrift.

Congress, that body so quick to stand up for its own pay, retirement and benefits is buttering its own bread and stealing the crust from the mouths of those who serve. They whine about how tough it is when they experience that bad day in the posh Congressional dining room; they whimper about how hard it is to make it on the most lavish benefit package the world has ever seen. Then they vote to cut benefits to disabled veterans.

If you are a real American you need to understand what they are doing while the eyes of America’s concern are firmly on our troops in Iraq.

Pickpockets depend on distraction.

Slipped into legislation with the experienced slight of hand wielded by these pickpockets of privilege, the Congress, in cooperation with the Bush Administration, are cuts to the slim funding now allowed to those who truly serve. These reductions slash past the bone into the pittance now allowed to those on active service and to veterans. Not satisfied that military families are on welfare the Congress seeks to grind them into abject poverty and abandon them to insolvent old age and disease.

You can trust the government to do two things; make sure that their own personal pockets are lined and that everyone else pays.

Doris is the wife of a sergeant on active duty. He is in the Gulf. She cannot afford to feed their children on what the Army pays. These well-mannered children struggle to help her cut costs. No second helpings are requested at their table. They understand that pennies are not to be wasted. Doris cries because, along with the terrible uncertainty of a husband at risk comes the sadness of being unable to buy balloons for her child’s birthday party or call her mother. Toll calls are too expensive on her slim budget. Her mother is dying along with her faith in her country.

It is not all bad news. The same people who originally established services for American Veterans bought Rene a wheelchair she could handle. Now she takes her son on those small journeys into the sunlight. Doris has balloons for the party.

But not because of Congress.

The Benevolent and Protective Order of Elks established the first hospital for America’s veterans just after WWI. No money from Congress was involved. Now, local lodges raise money as individual Elks reach into their own pockets. Rene went to them. They heard her. Rene had her wheelchair in one week. Toney Russell, the Chairman for Veterans in Santa Barbara, where Rene and her son both live, made sure it happened. I contributed. It was the least I could do. Her son fought for me, too. My daughter skimped to send money to Doris for the party. Individual Americans see what must be done and do it because it is the right thing.

Congress is still working on the least it can do. Less for everyone else - more for them. That is one goal they always manage to accomplish. The right thing is obviously way beyond them. They have problem understanding such esoteric concepts as ‘honor’ and ‘justice.’

Real Americans should send a message even Congress can’t ignore.

No member of Congress should have a benefit package better than is given to our armed forces. No member of Congress or any administration should enjoy benefits denied to those who risk their lives to give us freedom. Cutting benefits to Congress would save money and send a powerful message to these purveyors of privilege who abuse power every day of their lives.

And instead of a Congressional dining room let them eat MacDonald’s. But no Happy Meal toys, that is far too good for them.

US Navy 'has discussed possibility UFOs are coming from underwater base'

President Biden will not rule out ordering military to get vaccinated