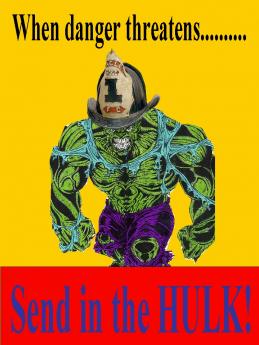 When I am caught at the top of a tall building on fire I want the firefighter who fetches me to make the Hulk envy his musculature. I don’t want him not hired because he is not female.

The ongoing debate over gender roles is still bubbling in a caldron of silliness generated by the misapplication of law. Some of us want to use government to force men and women to accept the roles we have decided Higher Powers have mandated. Those Higher Powers come in both the religious and governmental varieties.

If we do a Darwin Award for individuals who manage to kill themselves through stupidity what do we give to honor those who manage to destroy lives and opportunities for others through manipulation of legislation and policy? Muddy thinking is a waste of time and resources. It hurts individuals and confused the issue.

Most of us think we should choose those roles for ourselves limited only by our own innate abilities, luck, and willingness to work.

Ask yourself; is it appropriate to inject policy and a desire for social engineering into law? It is just as wrong to use laws to limit on the basis of gender as it is to make gender the most important characteristic. Personally, I think the idea has enough merit to qualify for a Darwin Award of its own.

It is time for a little clarity and to award some Darwins. Men and woman are different. This is a very good thing.

Our military has been used as a reengineering ground for the idea that male/female individuals are basically the same. They are not. Individuals come in all sizes and capabilities. Think of it as a bell curve where on we chart different characteristics. These include body strength, I.Q., creativity, the ability to multi-task and aggressiveness, to name just a few. All characteristics can have benefits in some circumstances and be annoying or dangerous in others.

My hair dresser does not have to bench press 400 LBS. to do the job.

We are different – but we are leaving a past where gender was used to assert social policy that limited the choices available to women. Denying choices to women was wrong. But turn about is not fair play.

The question is where do we go from here? My solution is the Unified Merit Standard.

On one end of the human race you had those huge, lithe, hulking individuals who look more like super heroes than anything human. When they walk they gleam with testosterone and danger. On the other end you have delicate bones and little upper body strength. Most of the individuals on this end are female. Your average person of one gender will not be that far removed from your average person of the other gender. We all envy that muscle rippling upper end but legislation will not get us there; even diligent work-outs won’t work for most of us.

We are different and that is not a bad thing.

Some jobs in the military call for the best physical profiles we can get. To place individuals in those roles who are not inherently qualified risks their lives. In turn they may be unable to perform when it becomes necessary.

We need a better way of assessing abilities that is gender blind but fair.

Gender is not a factor with a unified standard. If my daughter can qualify by passing objective standards for upper body strength and endurance to become a Navy SEAL then she may be candidate. But probably not. However, not all jobs in the military are the same. She has fine small muscle control and great reaction time and therefore may be the better candidate for flight training and for a shot at NASA. Women are smaller and thus cheaper to lift into space. They have better social skills and are very physically resilient. Perhaps the astronauts should have been women.

Men and women are different. Men are on average better with linear thinking, the result of their generations of focus on hunting and war. Men work best in hierarchies, this being the form of organization most comfortable for linear thinkers. Women on the other hand have adapted themselves through thousands of generations to mufti-task. The failure to do so would have been death to their children. It was necessary to watch for danger, gather food, and keep an eye on the kids to succeed in the ancient role of mother. Cooperation, the foundation of networking, is the most natural form of organization for women.

The rational decision is to adopt objective standards, not by law but by private usage. Private companies should take the inherent strengths of applicants into account because failing to do so denies them the best possible workers. No one should bail them out if they choose to engage in biased hiring instead of providing the best products and services to their customers. On the other hand, government should be forced to adopt those objective standards for all hiring they do themselves. Government works for all of us.

We should start with the military.

The armed forces are about combat, necessitating high standards for physical strength and a linear chain of command. They are not trained to be social workers. Many of the jobs presently handled by the military are being privatized and this is all to the good. There are many tasks now handled behind the lines as support, for instance counting the stock of belts, typing up reports, and working in the Pentagon kitchen. These do not need to be handled by a trained soldier. These can and should be contracted out.

Military personnel who train for and serve in combat situations are individuals who put their lives on the line for all of us. They should be appropriately and well compensated. Their benefits should be more sacrosanct than those of Congress, meaning they are untouchable.

Good ideas create prosperity and efficiency. Bad ideas are road blocks to real progress. Good ideas are adopted as behavioral strategies that then percolate out into the marketplace of our lives.

We want a strong military that knows it can trust us to do the right thing. I want the Hulk to be there when I need him.