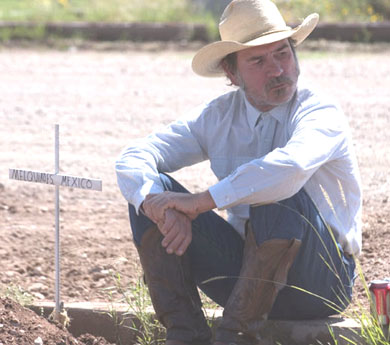 Few films have ever captured the feel of the desert Southwest better than Tommy Lee Jones' The Three Burials of Melquiades Estrada.

It's all there: the dust, the cattle, the brush, the waitress in the coffee shop with the flyspecked windows.

There's the Border Patrol and the local cop. The shopping mall, the television eye, ubiquitous. There are the Mexican workers with no green cards and the honesty that "someone has to pick the strawberries."

This is Jones' first theatrical film as a director, and it shows him not as yet one more hotshot from film school, eager to play with every gewgaw in the director's toy box, but rather—in the vein of Jean Renoir—one with an eye to actual human behavior and the sad but insistent fact that everyone has his reasons.

Jones plays small-time Texas rancher Pete Perkins. His hired hand is Melquiades Estrada (Julio Cesar Cedillo), and the two men have the kind of comfortable friendship that can happen when the boss doesn't make any more money than the help. They know how to share a beer.

The town is populated by people with neither ambition nor potential. The cop (Dwight Yoakam) doesn't want to be bothered. The waitress takes turns with the cop, with Pete and with her husband, and no one minds so long as she doesn't talk about the others when it's his turn.

And there's Mike Norton, a surly new Border Patrol officer (Barry Pepper), and his wife. He's at odds with the world. We can't tell whether he's bored or angry or just plain mean, but he shows his wife no more affection than a dog shows a chicken.

And when Norton beats an illegal immigrant couple on the job, his supervisor tells him he's out of line but doesn't pursue it any further.

Norton shoots Melquiades and buries him in a shallow grave in the desert. The second burial is when the police dig him up and rebury him in the cemetery without an investigation. The third burial is when Pete kidnaps Norton, forces him to exhume Melquiades once more, then packs them both off to Mexico to rebury his friend where he was born.

Jones shows he has more colors in his palette than the Mr. Alpha Male he played in Men in Black or The Fugitive. In fact, you almost instantly forget he is Tommy Lee Jones. Here he speaks more Spanish than English. (At least half the movie is subtitled.)

Pete is single-minded in his task, and we never know what he plans for Norton. They have a series of adventures on the way, including eluding police and feds, finding food, a rattlesnake bite and a Mexican medicine woman who has reasons to get even with Norton.

There's also a scene with Levon Helm as a blind old desert rat who takes in the pilgrims.

There is nothing standard or off-the-shelf about The Three Burials. When something happens it happens organically, driven by character, not plot. And at the end, when we reach a kind of transcendence, it's so understated, viewers may miss it. There are no angels singing, but it feels all the more real because of that.

The one affectation of the film is its structure: Time moves back and forth in flashbacks, and there are times we can't be immediately sure if what we're watching is the cinematic "now" or the past, and at least one scene is viewed twice in the film, at separate intervals and from different points of view. But these moments pass as context clarifies them.

This device has become so common, post-Pulp Fiction, that it's now just part of the common language of film.

I would not have given it 5 stars however, 4.5 is more reasonable IMHO. See this movie while you can.