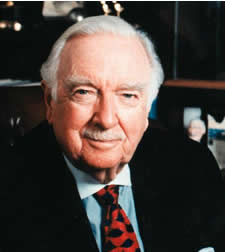 Telling the Truth About the War on Drugs by Walter Cronkite

Mr. Kronkite, the former managing editor of the CBS Evening News with Walter Cronkite, has been called "the most trusted man in America."

Born in St. Joseph, Missouri, Mr. Cronkite began his career as a news writer and editor for Scripps-Howard and United Press. He was a war correspondent for United Press and, after the war, reopened news bureaus for UP in Amsterdam and Brussels. Mr. Cronkite was the chief correspondent covering the Nuremberg trials and also served as bureau manager in Moscow. In 1950 he joined CBS as a television correspondent.

Mr. Cronkite is the recipient of a Peabody Award, the William White Award for Journalistic Merit, an Emmy Award from the Academy of Television Arts and Sciences, the George Polk Journalism Award, and a Gold Medal from the International Radio and Television Society. He is a long-time member of the Society of Professional Journalists.

His 1996 autobiography, A Reporter's Life, was a bestseller. An avid sailor, Mr. Cronkite wrote the text for South by Southeast, a record of his impressions sailing the waterways from Chesapeake Bay to Key West. A sequel, North by Northeast, was also published.

As anchorman of the CBS Evening News, I signed off my nightly broadcasts for nearly two decades with a simple statement: "And that's the way it is."

To me, that encapsulates the newsman's highest ideal: to report the facts as he sees them, without regard for the consequences or controversy that may ensue.

Sadly, that is not an ethic to which all politicians aspire - least of all in a time of war.

I remember. I covered the Vietnam War. I remember the lies that were told, the lives that were lost - and the shock when, twenty years after the war ended, former Defense Secretary Robert S. McNamara admitted he knew it was a mistake all along.

Today, our nation is fighting two wars: one abroad and one at home. While the war in Iraq is in the headlines, the other war is still being fought on our own streets. Its casualties are the wasted lives of our own citizens.

I am speaking of the war on drugs.

And I cannot help but wonder how many more lives, and how much more money, will be wasted before another Robert McNamara admits what is plain for all to see: the war on drugs is a failure.

While the politicians stutter and stall - while they chase their losses by claiming we could win this war if only we committed more resources, jailed more people and knocked down more doors - the Drug Policy Alliance continues to tell the American people the truth - "the way it is."

I'm sure that's why you support DPA's mission to end the drug war. And why I strongly urge you to support their work by giving a generous donation today.

You see, I've learned first hand that the stakes just couldn't be higher.

When I wanted to understand the truth about the war on drugs, I took the same approach I did to the war in Vietnam: I hit the streets and reported the story myself. I sought out the people whose lives this war has affected.

Allow me to introduce you to some of them.

Nicole Richardson was 18-years-old when her boyfriend, Jeff, sold nine grams of LSD to undercover federal agents. She had nothing to do with the sale. There was no reason to believe she was involved in drug dealing in any way.

But then an agent posing as another dealer called and asked to speak with Jeff. Nicole replied that he wasn't home, but gave the man a number where she thought Jeff could be reached.

An innocent gesture? It sounds that way to me. But to federal prosecutors, simply giving out a phone number made Nicole Richardson part of a drug dealing conspiracy. Under draconian mandatory minimum sentences, she was sent to federal prison for ten years without possibility of parole.

To pile irony on top of injustice, her boyfriend - who actually knew something about dealing drugs - was able to trade information for a reduced sentence of five years. Precisely because she knew nothing, Nicole had nothing with which to barter.

Then there was Jan Warren, a single mother who lived in New Jersey with her teenage daughter. Pregnant, poor and desperate, Jan agreed to transport eight ounces of cocaine to a cousin in upstate New York. Police officers were waiting at the drop-off point, and Jan - five months pregnant and feeling ill - was cuffed and taken in.

Did she commit a crime? Sure. But what awaited Jan Warren defies common sense and compassion alike. Under New York's infamous Rockefeller Drug Laws, Jan - who miscarried soon after the arrest - was sentenced to 15 years to life. Her teenage daughter was sent away, and Jan was sent to an eight-by-eight cell.

In Tulia, Texas, an investigator fabricated evidence that sent more than one out of every ten of the town's African American residents to jail on trumped-up drug charges in one of the most despicable travesties of justice this reporter has ever seen.

The federal government has fought terminally ill patients whose doctors say medical marijuana could provide a modicum of relief from their suffering - as though a cancer patient who uses marijuana to relieve the wrenching nausea caused by chemotherapy is somehow a criminal who threatens the public.

People who do genuinely have a problem with drugs, meanwhile, are being imprisoned when what they really need is treatment.

It surely hasn't made our streets safer. Instead, we have locked up literally millions of people...disproportionately people of color...who have caused little or no harm to others - wasting resources that could be used for counter-terrorism, reducing violent crime, or catching white-collar criminals.

With police wielding unprecedented powers to invade privacy, tap phones and conduct searches seemingly at random, our civil liberties are in a very precarious condition.

Hundreds of billions of dollars have been spent on this effort - with no one held accountable for its failure.

Amid the clichés of the drug war, our country has lost sight of the scientific facts. Amid the frantic rhetoric of our leaders, we've become blind to reality: The war on drugs, as it is currently fought, is too expensive, and too inhumane.

But nothing will change until someone has the courage to stand up and say what so many politicians privately know: The war on drugs has failed.

From Capitol Hill to statehouses to the media, DPA counters the hysteria of the drug war with thoughtful, accurate analysis about the true dangers of drugs, and by fighting for desperately needed on-the-ground reforms.

They are the ones who've played the lead role in making marijuana legally available for medical purposes in states across the country.

California's Proposition 36, the single biggest piece of sentencing reform in theUnited States since the repeal of Prohibition, is the result of their good work. The initiative is now in its fifth year, having diverted more than 125,000 people from prison and into treatment since its inception.

They oppose mandatory-minimum laws that force judges to send people like Nicole Richardson and Jan Warren to prison for years, with no regard for their character or the circumstances of their lives. And their work gets results: thanks in large part to DPA, New York has taken the first steps towards reforming the draconian Rockefeller Drug Laws under which Jan was sentenced.

In these and so many other ways, DPA is working to end the war on drugs and replace it with a new drug policy based on science, compassion, health and human rights.

DPA is a leading, mainstream, respected and effective organization that gets real results.

But they can't do it alone.

That's why I urge you to send as generous a contribution as you possibly can to the Drug Policy Alliance.

Americans are paying too high a price in lives and liberty for a failing war on drugs about which our leaders have lost all sense of proportion. The Drug Policy Alliance is the one organization telling the truth. They need you with them every step of the way.

And that's the way it is.