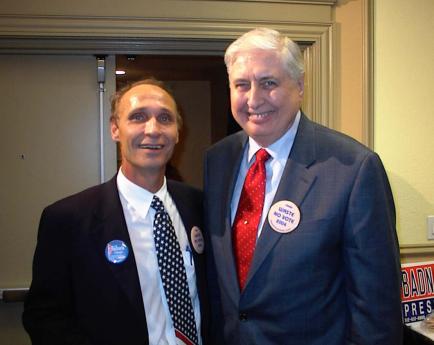 WASHINGTON, March 2 /PRNewswire/ -- Harry Browne, best-selling author and two-time Libertarian Party presidential nominee, died in his home in Franklin, Tennessee, Wednesday night, March 1, after a long illness. He is survived by his wife Pamela and his daughter Autumn. He was 72.

Browne broke into national prominence in the early 1970s with three best- selling books. "How You Can Profit from the Coming Devaluation" was the first to make the best-seller lists. His next book, "How I Found Freedom in an Unfree World," is widely regarded as a modern libertarian classic and has gone through many printings and editions. His third book, "You Can Profit from a Monetary Crisis," reached #1 on the New York Times best-seller list. Browne was also the author of 11 other books, including "Why Government Doesn't Work" and "The Great Libertarian Offer."

Browne twice ran for President as the nominee of the Libertarian Party in 1996 and 2000. He was a frequent guest on radio and TV, both as a political and financial commentator. Browne was a co-founder of the Downsize DC Foundation and DownsizeDC.org, Inc. and a strong advocate of that organization's "Read the Bills Act," which would require Congress to read every word of every bill before voting on it.

Jim Babka, President of Downsize DC, was a close friend and associate, who guest-hosted Harry Browne's radio show during his illness. Mr. Babka is available for interviews about the life and legacy of Harry Browne.

1 Comments in Response to 1996 & 2000 Libertarian Presidential Nominee Harry Browne gone. He was 72.

I had the privilged to meet Harry Browne at the pilot taping of his Show "The Liberty Hour with Harry Browne". It was like a SNL with a libertarian twist. Harry did the commentary for the show. It was an awesome experience for both me and my best friend to actually see how a live show is taped. All I can say to you Harry is "I know you have inspired many to greatness and the flame of liberty burns hot in my body and soul because of people like you!"

My Discovery of Freedom

Are Libertarians Doing Enough to Listen to the Concerns of the Masses?

The Foundations for Liberty

Libertarianism Is the Only Solution for Healthcare and the Coronavirus

Bionic Mosquito Is Back on Immigration