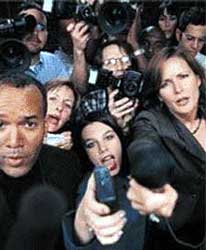 of America: From Freedom to Fascism

The Fine Arts Theatre in Beverly Hills, which seats almost 500, was overwhelmed by the overflow crowd which in the end, was forced to wait outside in a long line stretching down the block until WTP Chairman Bob Schulz and Aaron Russo reworked the agenda in order to accommodate two showings of the film, America: From Freedom to Fascism that evening.

All told, the approximately 750 who got to see the screenings were markedly enthusiastic, and as at previous screenings elsewhere, gave the film and Russo rousing ovations.

Russo has just released a streaming preview of the movie. The trailer is currently available in Quicktime and IPod formats. We urge everyone to watch the short preview and distribute the trailer link far and wide.

Following the showing this Sunday in Atlanta the next showings of Russo's new film will be next weekend in Medford/Ashland, Oregon (Sat. 3/11) and Portland, Oregon (Sunday 3/12) and Spokane, Washington (Monday evening 3/13). The following weekend (March 18/19) the film screens in Chicago, Illinois and Ann Arbor, Michigan.

Farmers Got Billions From Taxpayers In 2019, And Hardly Anyone Objected

The Progressive Income Tax: A Tale of Three Brothers