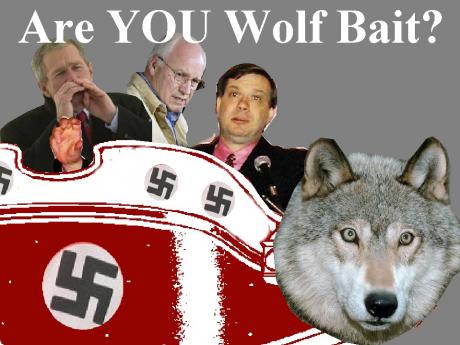 As demonstrated by revelations on the much maligned competence and foresight of Michael Brown and the treatment alloted to Scooter Libby all of you supposed NeoCon Insiders should pause to reflect on the reality you presently face. You may think you are a NeoCon Insider but if you were only brought on board as recently as 2000 you are most probably not.

No matter how elegant your office space or how impressive your title and rich your paycheck the chances are that in this administration you are there either for the same reasons Scooter and Brownie got their jobs or you are there for something that is, perhaps, even more devious. If, like others, you were astonished to have received your appointment you should allow the shivers of fear to percolate through your nervous system. It is only reasonable to be nervous.

All administrations must needs fill thousands of appointments but only this administration has done so with such a devious agenda, laying out the battle ground in advance in curious ways.

G. Gordon Liddy fell on his sword because he was self programmed to do just that; it accorded with his views. That will not be he case with yourself. The NeoCons doubtless noted what good cover he made.

The conferences the Bush Administration held before this administration was assembled were different than any administration in the past. Real NeoCon Insiders, such as John Fund, provided the names for appointments, such as your own. They had unusual criteria for their suggestions, criteria that included if you could arguably be spun as incompetent when the time came for you to go off the back of the Sleigh. They knew the G. Gordons were thin upon the ground. You can think of it as an appointment but the reality is very much like being the guest of honor at a cannibalistic barbecue. In ancient times they always ensured the guest of honor for the ceremony was well fed. Easy to see why.

The NeoCon Cabal was not focused on the ordinary goal of an incoming administration. Their agenda was more personal. They were looking to reformat for the purposes of efficient thievery while placing patsies to take the blame. This is like laying land mines in the bureaucratic morass to prevent them ever reaching someone important. You were nominated as a land mine; notice the land mine never survives.

That was in accordance with the traditional tactical plans of Rove, Cheney, et al. It was necessary to lay down in advance the cover that would cut off possible prosecution and blame for the train of disasters that, if examined, would be revealed to be clever transfers of wealth taking place right out in open under the coloration of administrative business and policy.

On some level you are probably beginning to realize this. It is obvious when you stop listening to what they say and watch what happens. Stupidity and incompetence can only explain so much, after all.

New Orleans and Katrina? A fabulous opportunity to gentrify and move out into other states the pesky voters who were a bastion of blue in a world the NeoCons see as better red.

That is one example. Notice the aftermath of 9/11, too. That allowed for the cancellation of that pesky Bill of Rights and allowed BushCo to offer to his core constituency the free use of America's military to mount a take over on oil fields of the world. Clever move. In this way money is taken from the pockets of Americans and transferred into the wallets of the PetroElite, allowing them to acquire oil while minimizing their costs. It is a wonder that the military serving over there were not required to don company uniforms for their tours of employment as PetroSecurity.

You, as the faux Insider are probably growing uneasy about all you see going on around you, and rightly so. You thought you caught the gold ring, serving in the Inner Circles of Power only to begin to suspect you are Wolf Bait, fated to dive off the back of the Sleight of State when it is your time to serve the Straussian Select.

Of course, there is another explanation for your presence.

Perhaps you are there to still the voices that would otherwise be raised in alarm. If you got that appointment and are not primarily intended as a Land Mine you are probably Hostage of Affinity. By that I mean that you were placed because you have lots of friends outside the administration in a group, such as the Evangelical Bemused or in such ideological groups as conservative and libertarian.

To create the appearance that this administration was actually going to carry out the promises made to those groups they needed 'presence' from those groups. You are 'presence.' Your friends are reluctant to attack you and that is why you are there. Slightly naive and credulous chumps like yourself provide essential cover and could, in times of need, become Land Mines. By so doing the NeoCon Cabal silenced those in your own ideological affinity group who would have long since be up in arms denouncing the predatory behavior of the Bushanista.

Now it makes sense, right? There is a reason the administration ignores you unless it is time to trot you our for a round of ideological ratification. Don't feel too neglected. You will doubtless get your own turn as Wolf Bait when the time comes. The canny ones among you are now gathering information, copying papers, absconding with office supplies, placing money off shore, and reconnecting with those neglected friends who have been so less important since they became Insiders.

Humility is good for the soul.

This concludes our first Lesson to the Faux NeoCon Insider. Don't forget to send a thank you note to John Fund, or that other Real Insider, for getting you this great job!

Next: The 401K Syndrome and the profits of Tyranny.

NeoCons are not Conservatives, Republicans, or Americans. They are opportunists working on the build out of the perpetual ATM machine from our pockets to theirs.