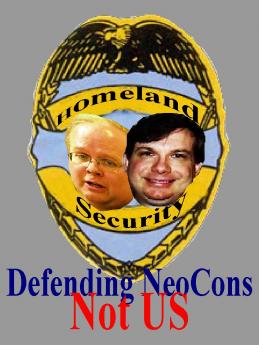 How can it be that a long time member of the National Federation of Republican Women and member of the Daughters of the American Revolution could be Threat To National Security? This came as one of those moments when you are sure they must be talking about someone else.

This was especially shocking to me since I seem to be the Threat. I was very surprised that my blog had elicited so much attention from the Powers That Be this morning. I learned about this when a friend called me and said her attempt to get on and read my latest scribble was been greeted with the warning, 'FORBIDDEN!!!!' Other calls came in rapidly.

And I have been having so much fun writing about my experiences and insights and sharing my graphics.

Of course, the thing one needs to ask is what the NeoCons mean by 'National Security.” Their definition has nothing to do with bombs or bellicose behavior of any kind really. Rather, it goes to the issue of keeping most people from understanding what is going on so they can do something about it. This is the Mushroom Principle, keep them in the dark and feed them fertilizer.

The first hand insights came along with the experiences life sent my way while raising children, volunteering as a room mother, Brownie Leader, Cub Scout Den Mother, and (this following activity calls for a very similar set of skills) writing and doing political organizing for the Libertarian Party and then for the same National Federation of Republican Women. I include the nice picture of myself with Laura Bush having Tea at the White House and myself at the table at the Cato Institute Gala in Washington D. C. in 2003 sitting next to Heidi Smith, then the President of the National Federation of Republican Women. As you google you will also notice I donated to No Child Left Behind.

(for those photos go to http://howtheneoconsstolefreedom.blogspot.com)

Not your usual profile for a terrorist.

Google, which acquired Blogger, the place where my sites are hosted, did not even write me an e-mail before dragging out the barriers and cutting me off.

And I thought we had a relationship. Very sad. Like I said, some of my friends starting calling and complaining and voila! It was back up.

I had warned that there would be dirty tricks afoot in a recent blog. So if this happens again you can still go look at my articles by googling (ironically) my name. Also go to American Politics Journal and OpedNews and Freedom's Phoenix. I am told on good authority others will also be carrying them soon.

Just shutting down sites is one of the more efficient ways to keep the opposition quiet.

What could I have said to upset them? I suspect their reaction came more from concern for what I was going to say next. Thankfully, shutting down my site will not prevent anything like my free speech, guaranteed under the First Amendment, from happening. I will keep using the First Amendment even if they revoke it.

Thanks to a newly started on line Radio Station, BBS, TNT News, I will not only keep on Blogging but also be able to talk to people on line and on the air.

As I pointed out before this administration of grown larger, plumper and balder but not grown up social misfits are very upset that despite the fact they have managed to ice every branch of government from Congress (preventing those nasty impeachments) and the Supreme Court (must not let there be oversight as to the Constitutionality of such questions as the Patriot Act) and the Electoral System (Strauss SAID we could cheat!!) people keep talking and complaining and exchanging information.

Really, if you close your eyes and just think about what they are doing it is obvious no one should trust them with even a cork pop gun, much less a hunting rifle or, for gosh sakes, nuclear weapons. Ethically I would be concerned with trusting them in preschool. I know, I had a lot of kids.

If I was sending them out to sell Girl Scout cookies I would figure they would eat most of the cookies themselves.

The events that put me in the middle of this mostly related to my daughter, Morgan Pillsbury. Morgan showed the bad judgment to become involved with one of these plumped up reprobates named John Fund. It was bad judgment on her part, and I am not defending her on that. But John was far worse because his behavior was even less conscionable than hers. No matter what, beating someone you out weigh by 150 Lbs. is not nice. Nice is a very important attribute in anyone. I suspect that there are no nice NeoCons. Sad thought.

That matter, which John and his NeoConning buddies have managed to dodge, is now coming up to another court date and the timing is bad for them because John is one of their most trusted Political Operatives.

I have lost any trust in our justice system; Robert Morganthau, District Attorney for Manhattan, dropped the criminal case when by law he was not permitted to do so. Regrettably, I was forced to conclude that the NeoCons 'hold paper' on Morganthau, who usually does the right thing in cases of domestic violence.

Holding paper can mean they have a video of Morganthau having sex with a model or a cockatoo or some other nasty thing or that he has tax problems, or any of many different forms of coercive pressure. Holding paper covers all of them. Someday I suspect we will know what was going on there.

Sometimes I wonder what they could have been thinking when they decided to help Fund.

What did they expect me to do? What kind of a mother and human being would I be if I did not defend her when, on this occasion, she deserves defending?

Defending ourselves and our families will most likely become an issue for all of us.

This is an interesting time in the NeoCon game plan. While they have iced the usual means for protest the Internet remains a weak point for them. Their attempts to control the exchange of information and insight and commerce remain largely unsuccessful, though we must anticipate continued attempts through corporate biggies like Google and AOL. That continued conduit for information has allowed significant numbers of Americans to find out directly from Europe and other places around the world what is happening. This is in large part responsible for the rapidly deteriorating popularity of this Administration, along with the increasingly blatant moves to seize control of American property on their part, for instance the Ports Sale.

The NeoCons are doubtless thrashing around right now, unsure which direction to take. They are in the latter part of a long range campaign and the components for their campaign to control America is now encountering realities they did not anticipate. Europe is growing alarmed at the high levels of radioactivity swept in from Iraq from the Depleted Uranium used by us there in munitions; Americans are coming back from that war with symptoms now understood to originate from that source. The credibility of this Administration is suffering to such an extent that they may well decide to speed up a more oppressive domestic agenda. Americans need to be distracted and their campaign to reawaken concern for National Security is faltering. Any Terrorist attack occurring at this point could well solidify opposition instead of increasing support.

They have already allowed inferences of their long term plans to slip; The publicity campaign last year regarding Avian Flu, in retrospect, indicates a likely possibility the release of that plague was intended to distract Americans while radically decreasing the population. Actions speak louder than words: why did they broadcast samples of the disease, which still has no known cure, all over the world except to create cover for themselves? It is not that the NeoCons are not aware of environmental issues, just that their plans in that regard take a very different direction, shall we say. As a long range plan this goes along with their science fiction mentalities; as Straussians there would be no reason not to follow such an agenda.

But the masters of political intrigue and now confronting a very different reality.

The NeoCons have moved from the application of political tactics, something they have studied in detail and understand well, to a dependence on their own far less reliable understanding of technology, not their strong suit; While they doubtless consult real experts one wonders if they are entirely frank regarding their desired outcomes. Experts are generally good at letting you know if you explain all of the variables, but lacking that, the miscommunication could be huge.

The present DU toxicity levels in Europe would lead us to conclude that the NeoCons are failing to foresee even the short term consequences of their own plans.

So controlling the Internet – and our access to inconvenient information - has to be high on their priorities.

Therefore blogging and surfing for reliable information is a matter of self defense.

So keep on Blogging. I always told the Brownie and Cub Scouts to be prepared;

Get off the grids: Organize Locally; Build Coalition.