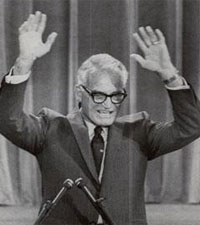 Barry Goldwater
The Goldwater Institute invites you to a discussion on

Allison Hayward
Former Counsel to Bradley A. Smith of the Federal Election Commission

When Arizona's Clean Elections law was adopted, supporters hoped it would increase citizen participation in the electoral process, attract candidates from diverse backgrounds, and stymie the influence of special interests. Opponents were concerned about the increased role of the state in the campaign process and the rights of citizens to voluntarily participate in the process. After six years—three election cycles—what have we learned, and where should we go from here?

Please join us for this important discussion about publicly financed elections with the nation’s leading experts in the field. Reception to follow.

One block north of McDowell, west of 7th Street

This event is free of charge.