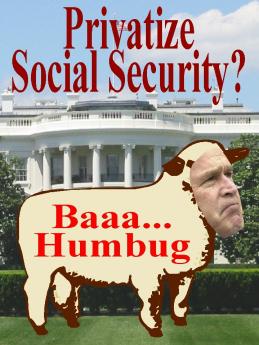 As the joke goes, when three wolves and a sheep vote we all know who is going to be dinner. How does that work when there are millions of sheep and only a few thousand wolves? That in a nut shell is government today. It is time the sheep reconsidered how the game is to be played.

While this administration might have stopped casting hungry eyes on the profit potential of Social Security that is no guarantee that the fingers connected to those eyes might not still be twitching. Since they have spent us into unprecedented debt soon it will be impossible to continue their predatory behavior without continuing to open new vistas for their avaricious gleanings.

Although the Dubai Ports Deal failed it is well to remember the enthusiasm Bush and his cohort of NeoCon Counselors viewed what looks like the mistimed garage sale of America's property.

This will probably not reoccur before the elections this autumn – but after that all bets are off and public goods of all kinds can be assumed to be up for grabs. Outright sale is only one means for milking assets supposedly owned by the public. Look for bank shots through the cohort of clutching corporations and financial institutions who comprise Bush's 'core' constituency.

But only sheep chew placidly while the shepherd is inside sharpening his knife. We need to think about saving the assets.

We already know through their long ogling of Social Security that it is on their menu. That plan has been percolating through their calculations for a long time. In fact, since 1977 when a 20ish young man declared he intended to go to Washington D. C. and get rich. The man's name was Edward H. Crane, III. Don't pause to wonder if he is any kind of old money. He is not; but his eyes have ever been on acquiring that status. Ed had a vision of himself as walking the halls of power and to accomplish that he needed something to sell. He had also been involved in Libertarianism, the then newly fledged movement that spoke its determination to return America to its individualist roots, reinstalling all of our freedoms. Ed looked over the assets there and decided to become an intermediary for selling those ideas to corporate interests and to Congress through what is known as Cato Institute. To make that attractive and acceptable to Libertarians he used the rhetoric of freedom as cover.

One of the first papers written by the original cadre at Cato for the presidential campaign of Ed Clark, a candidate for the Libertarian nomination in 1980, was the privatization of Social Security. The idea was greeted enthusiastically by Libertarians who naively assumed this would give Americans control of their money and allow for retirees to enjoy far larger retirement incomes. But that is not how the application of policy works when you want to sell it to the greedy who view government as an elegant way to separate the sheep from their hard earned money.

The amount of money under discussion was enormous.

If on the one hand you allow government to keep the money it has stolen through the misappropriation of Social Security while transferring the money still to come to financial institutions for 'investment' owned by your friends, then you might be working with chumps but it is not chump change.

Reselling the ideas of freedom to the greedy made Edward H. Crane, III a wealthy man.

Decoupling accountability, either from government or from corporations, from profits while selling the ideas using the rhetoric and cover of freedom reborn became the formula for success for all involved. Now, that is sleazy.

So what to do instead?

The fact is no one's retirement is safe if it controlled by government. They are not to be trusted. But in the last over 200 years America has birthed institutions by the dozen most of us trust with our lives, adding infrastructure to those already existing that have proven to be reliable. You probably belong to one yourself.

You may be an Elk, a member of that Benevolent and Protective Order that opened their hearts and wallets to fund the first hospital for American Veterans in 1918. Yep, that wasn't the government either. You may be a member of Rotary International, Soroptomists, The American Humanist Society, or any of an incredible number of organizations run mostly by volunteers who are the backbone of good works in America.

This also includes religious and spiritual organizations of all kinds. Churches, mosques, synagogues, temples, all of these present opportunities. Each of us should be able to judge for ourselves how trustworthy our own might be for the purpose. I have friends who are Mormon, Catholic, Congregationalist, and Muslim who say they know they can trust their own church with their retirement. I am sure there are many others.

What to look for in any organization is the internal values regarding responsibility, accountability and how long individuals have been volunteers invested in making their own mission work.

Institutions organized along these lines possess the essential attributes to handle large amounts of money honestly and to do so while keeping the costs minimal; they had to do that to be successful in the first place. As volunteer organizations the motivation for moving up and donating even more time is dedication to the Mission of the organization. Most of those who work at the National or International level have been socially and emotionally invested in that organization for a life time. Their 'profits' and not calculated in dollars but in knowing the work is done and done right. They want to leave a legacy of love for future generations. Can they meet that challenge? If their members ask them to they probably could.

Allowing the transfer our retirement plans from an institution, government, that has proven entirely unreliable to institutions who have proven their worth over generations is only common sense. We can't make them do it but their record of civic responsibility would make it likely they would offer that service to their own members.

This would be a win in many different ways. Ensuring that the transfer of funds into these trusts opens up another opportunity to change how government 'works.'

At the same time removing what proved to be an irresistible temptation to those in government would reduce that well documented impulse to steal. Removing attractive nuisances from the morally impaired is only responsible. And Edward H. Crane, III would have to figure out something else to do for a living, eventually. For a while he will doubtless continue his campaign to repackage despotism as freedom and sell it to the credulous and greedy.

Now, how to pay for this. Collusion to engage in theft is a crime. The attempts to hold up a banner of 'sovereign immunity' by those in government must finally be ended. Government is not sovereign; the only sovereignty mandated by America's Mission Statement is that accruing to each individual. A liability has been created by those who allowed Social Security to be converted from a trust fund to a source of funds. They are as individuals absolutely liable. The corporate interests who cooperated are liable; and penalties should be exacted in full measure.

Government is no more sovereign and immune than is your plumber when he screws up the repair of your toilet. Our justice system also needs reforming; a system for justice is intended to ensure that those doing wrong are held accountable. It is time to do that to government and its minions.

Americans face a challenge that holds both hazard and promise. We faced a similar threat at the beginning of the Revolution and at the beginning of WWII. It is always individuals working cooperatively for a common goal who change the world. America was built on those principles and it can be rebuilt the same way.

The naked politicos waltzing around DC in their sheepskins are the past. The future belongs to us – if we choose it.

Get off all the grids, organize locally, build Coalition. Freedom is still a good thing.