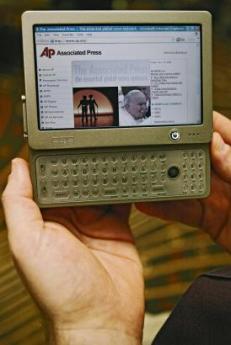 Americans with high-speed Internet connections at home are far more likely than dial-up users to go online for news, a new study finds.

The Pew Internet and American Life Project says 43 percent of broadband users turn to the Internet to get news, compared with 26 percent for dial-up users. Broadband users are also more likely to read a national newspaper, but less likely to turn to local television.

Still, local television is the leading source of news, used by 65 percent of dial-up users and 57 percent of broadband users. National television and radio are also popular sources across the board.

Among dial-up users, the local paper is the next leading source, but among broadband users, the Internet has a slight edge — 43 percent vs. 38 percent. The margin of sampling error is plus or minus 3 percentage points for questions asked only of broadband users.

The study also finds Americans largely unwilling to pay for news — only 6 percent of Internet users have bought video clips, articles or other news items online — but more than half have registered at free news sites by providing information about themselves.