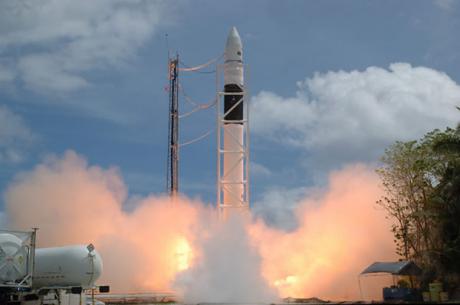 Falcon 1 on her maiden voyage launching a satellite to space
On Friday, March 24 at 3:33 p.m. Arizona (MST) time, the Falcon 1 rocket began its journey to orbit, but regrettably failed about one minute into launch during the first stage burn. Details are unknown. Designed from the ground up by SpaceX, Falcon 1 is a two stage rocket powered by liquid oxygen and purified, rocket grade kerosene. On launch day, Falcon 1 launched into the history books for several notable reasons:

• It will be the first privately developed, liquid fueled rocket to reach orbit and the world's first all new orbital rocket in over a decade.

• The main engine of Falcon 1 (Merlin) will be the first all new American hydrocarbon engine for an orbital booster to be flown in forty years and only the second new American booster engine of any kind in twenty-five years.

• The Falcon 1 is the only rocket flying 21st century avionics, which require a small fraction of the power and mass of other systems.

• It will be the world's only semi-reusable orbital rocket apart from the Shuttle.

• Most importantly, Falcon 1, priced at $6.7 million, will provide the lowest cost per flight to orbit of any launch vehicle in the world, despite receiving a design reliability rating equivalent to that of the best launch vehicles currently flying in the United States.

The maiden flight will take place from the Kwajalein Atoll of the Marshall Islands. The customer for this first mission is DARPA and the Air Force. The payload will be FalconSat-2, part of the Air Force Academy’s satellite program that will measure space plasma phenomena, which can adversely affect space-based communications, including GPS and other civil and military communications. The target orbit is 400 km X 500 km (just above the International Space Station) at an inclination of 39 degrees.

SpaceX is developing a family of launch vehicles intended to reduce the cost and increase the reliability of both manned and unmanned space transportation ultimately by a factor of ten. With our Falcon line of launch vehicles, we are able to offer light, medium and heavy lift capabilities to any inclination and altitude, from low Earth orbit to geosynchronous orbit to planetary missions.

Even prior to first launch, SpaceX has a strong manifest through 2010 with nine contracts representing nearly $200 million. We have three Falcon 1 launches scheduled over the next twelve months and the Falcon 9 debut is planned for late 2007.

SpaceX recently announced that Jim Maser will be joining the company as President and Chief Operating Officer. Mr. Maser has an exceptional track record of success in both the technical and business aspects of the launch vehicle industry. Before joining SpaceX, Mr. Maser served first as Chief Systems Engineer and then as President and General Manager of Sea Launch, arguably the world's most successful commercial launch company.

SpaceX is the third company founded by Elon Musk. Previously he co-founded PayPal, the world's leading electronic payment system, which was sold to eBay for $1.5 billion in 2002. In 1995, Mr. Musk co-founded Zip2, which sold to Compaq Computer Corporation for more than $300 million.