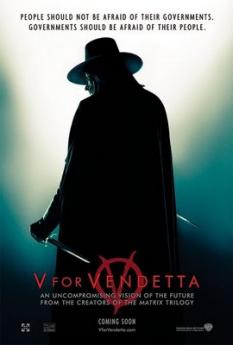 People should not fear their governments.

I did not know exactly what to expect when I went to see V for Vendetta. I had a vague outline of the story. I saw reviews that praised it and others that damned it. I confess I never read the illustrated novel on which it was based.

But something in the attacks I read stirred a flicker of hope in me. The attackers seemed to fall into two categories. On one side was the theocratic Right, those rabid fear mongers, Bush worshipping, bomb-them-into-the-stoneage conservatives. They were rabid about the film. They drooled contempt all over it and castigated it in the most vile ways. I thought that anything that inspired such hatred in these people might possibly have something of value.

And then there were those mainstream critics, those who deem themselves the architects of future public opinion; those on the socialist left who dominate so many of the arts and letters pages of our publications. They too hated this film.

Unlike the Right, which doesn’t have the intellectual ability to forge skilful attacks on the film these purveyors of state worship attacked the acting, the screenplay, the plot. They did not particularly want to name the very thing that terrified them the most. They did not want to identify the core message of this film, for to identify is to admit that a view of government, so contemptible to them, so in opposition to everything they stand for, could possibly exist.

If acknowledged it would, for them, make it real. And that would be something so antagonistic to their core values that they could not—that would not—ever admit that it exists. Instead, they drone on about the “selfishness” and “greed” of any who advocate the right of the individual to exist for his own sake.

Film, like all art, is a recreation of reality. As such it establishes borders which are not so clear in life. In V the hero of the film clearly is not a “robber baron” who advocates freedom merely to exploit others. And because freedom is intimately and totally tied to liberal capitalism the Left must denigrate freedom’s advocates by appealing to 2000 years of Western mythology that we all must live for the sake of others. And to do otherwise is to be a reprobate and evil.

In life the Left has created their own “art form”, their own recreated reality, according to their own values. Those who do not advocate living for the sake of the collective are the arch villains of Left mythology. And those on the Left, intelligent enough to understand V for Vendetta know the film must be attacked. But in their attacks they must not name that which upsets them the most.

The authoritarian Right launched, instead, a full frontal attack on the film and its values. This film opposes their agenda so clearly and forcefully that they have no alternative but to hate it. Yet they lack the ability to undermine the film without giving away its core values.

V, as he is known, is the arch foe of an authoritarian government that has taken control of England. It uses fear, force and faith to keep the public in submission. It preaches the necessity for obedience to government as the only means of keeping people “safe”. It is George Bush inflated for the big screen.

And the betrayers of Reagan, and assassins of the values of Goldwater, know it. It terrifies them that people might line up at the cinema and see this film and understand what it means. If enough people see how fear is being used to manipulate submission to the subtle, and blatant, violations of human liberty their con game is over.

They will say that the film glorifies terrorism. But it does not. In fact it is quite clear that the only people terrified of V are the authorities. Terrorism is a tactic of killing the innocent. And V quite scrupulously avoids doing that. Terrorism is random and unpredictable. What V does is systematic and even his future victims know he is coming for them and why.

The film begins with an explosion but one that kills no one. It ends with another explosion again with out taking an innocent life. There are those who die at the hands of V but each of them is guilty. Each dies because of his own actions. At the beginning of the film Old Bailey, the historic home for British justice, is destroyed. It is destroyed because it has already been destroyed from within. Criminals wear the robes of the court and the innocent are prosecuted, convicted and punished. The tactics that V uses are the only means by which justice can be done in a society run by criminals.

Nor does V attempt to inspire a violent overthrow of the regime. We only need go back to the fall of that damnable Wall in Berlin. It fell without acts of violence. It fell when sufficient numbers of people rose up and refused to submit. V makes it clear that his attack on parliament is a symbol to give the people hope that they can withdraw their consent. In the end tyranny can not survive without the sanction of the victim.

Over four centuries ago the French liberal Étienne de La Boétie wrote his manuscript, The Politics of Obedience: A Discourse on Voluntary Servitude. At any point in history the rulers are vastly out numbered by the ruled. For any government to remain in power the people must consent.

Tyrants obtain the acquiescence of their subjects in several ways. One is to buy them off with the baubles they dangle before them, baubles stolen from others and showered on the favoured earning the gratitude of those who live off the productivity of others.

Other tyrants use fear. One common fear is that of an “enemy”. In 1984 Big Brother keeps the people submissive by a series of new enemies all of whom are portrayed as potent threats. And others inculcate terror into the hearts of the people, terror of the consequences of standing up to the rulers.

The true terrorists in V for Vendetta are those who have seized power in this future England. They are the ones who keep people in submission through fear, fear of an outside enemy, and fear of the state itself. To say that V is a terrorists himself is to turn the film entirely inside out. But I submit that many of those who attack this film for “advocating terrorism” know that it does not do so. It advocates removing fear as a means of imposing submission on a nation. And that is why V speaks of how one symbol, one act alone, if enough people endow it with meaning, can give those people hope. And V seeks to do just that.

Those who love liberty should run, not walk, to see this film. They should encourage others to see it as well. I suspect that most of those who denigrate and attack this film are advocates of imposed control, order and fear. They are the precursors of the villains who rule this future society. It will not be popular in the halls of theocratic cults. It will not be popular at the White House or in the halls of Homeland Security. Nor will it appeal to those inflicted with what Hayek called a “fatal conceit”, the would be central planners of the lives of others. This film will not win their accolades and applause. Nor should it. As V says: “People should not be afraid of their governments. Governments should be afraid of their people.” Thomas Jefferson would applaud this film. And so do I. As for those who attack it: draw your own conclusions.