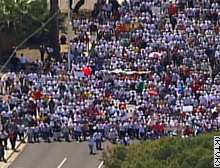 Chris Simcox is the controversial cofounder (with James Gilchrist) of the Minuteman Project, and the project's main spokesperson, which brought nationwide attention to the problems created by illegal immigration on our southern border.

In October 2002, Simcox issued a public call to arms, inviting readers of his newspaper, the Tombstone Tumbleweed, to join a "Citizens Border Patrol Militia" whose function, Simcox said, would be to "shame the government into doing its job" of controlling the nation's border with Mexico.

He founded Civil Homeland Defense, a group which patrolled the border, and has assisted the U.S. Border Patrol in detaining thousands of illegal aliens..

Love him or hate him, this breakfast will be one to be remembered and talked about well past the election.

It's fun to fight for freedom at the...

The winds of change are blowing,

A STORM IS BREWING...

RAISE THUNDER WITH US!

Join us in continuing our long tradition, this 36th season of the Arizona Breakfast Club this Saturday at

located in front of Paradise Valley Mall, on the North side of Cactus Road, approximately 2.25 miles from SR 51, West of Tatum

Trump to suspend all immigration into US over coronavirus

Why not give the illegals what they 'demand'?