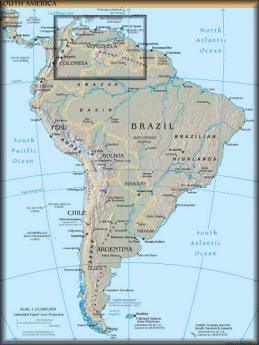 The way things are today, why on earth would the "big fool lunatics in charge" in Washington ever want another war or maybe two of them. Already they're "waist deep in the Big Muddy" in two out-of-control debacles in the Middle East and Central Asia, and the country is leaching multi-billions we don't have to pay for them. Despite this hopeless chaos, it looks almost certain we're now headed for a new one against another Middle East 4-letter country beginning with the letter "I", and may try to "double our displeasure" by including a "fracas in Caracas." I just learned about an "Operation Bilbao" which appears to be blueprint to overthrow the Chavez government and likely includes in it targeted assassinations starting with the guy in charge.

Do these neocrazies in Washington really think they can pull all this off - wars on four fronts. Don't these guys have anyone around with a sense of history? Forget about morality and such. These folks have none of that.

But even kids in high school learn that Hitler was doomed when he decided to wage war on two fronts. And we all know what happened to Napoleon and a few other less notables. It's what happens when your "eyes get bigger than your stomach", and the indigestion that results is called "demise by overreach." It's no different now than a couple of generations ago or a couple of centuries either.

AGAIN, IT'S FOR THE OIL STUPID, AND THE THIRD AND FOURTH TARGETS ARE IRAN AND VENEZUELA

Call it the curse of having too much oil or maybe any. If only they just grew stuff we eat there instead of pumping the stuff our "gas guzzlers" do. Iran and Venezuela have so much of the "black gold" their countries are practically floating on it. But in a world where a predatory USA can't even breathe without it, that makes them public enemies one and two - unless they agree to hand it all over to us. In "Godfather" language, that's called "making an offer they can't refuse." That's the way it works in a world where "only what we say goes and we make all the rules." Any nation unwilling to follow our orders and obey them becomes a target for regime change by whatever means it takes - including by illegal aggression using industrial strength nuclear weapons the US now plans to throw around like hand grenades.

I've written some in other articles about Iran and said then and now I believe things are "hotting up" as my UK friends would say. They're No. one in the target queue, and it could be (nuclear) bombs away at any time. But here I only want to discuss Venezuela because after Iran I have almost no doubt Venezuela is next. The US may even try to make it a twosome in their infinite lunacy. These reckless, lawless fools are often wrong but never in doubt. When you rule the world or want to, you even believe you have the right to blow it up.

To understand what's in the wind, all you have to do is clean out your ears, open your eyes and pay attention. The US war drums are beating a duet, and they're getting louder. Listen up, here's the message on the Venezuelan front. On March 28, the Virginia Pilot of Norfolk, VA (that's where the biggest US naval force is based and where I once lived for a year) reported that the US Navy is sending an aircraft carrier strike group composed of four ships and 60 aircraft to Caribbean and South American waters for a "major" training exercise. All four ships are capable of launching cruise missiles that might and could be armed with nuclear warheads. By my reckoning, that's a provocative and hostile act.

Now combine that with the growing hostile rhetoric coming out of Washington directed at Hugo Chavez. I wrote in a previous article that Latin American expert James Petras wrote (now some months ago) that the US has a strategy to overthrow President Chavez by military force and at the same time destroy the Cuban revolution in a "two step" process - "first overthrow the Chavez government in Venezuela, cut off the energy supply and trade links (to Cuba) and then proceed toward economic strangulation and military attack." He also believed then the US would employ a "triangular strategy" to overthrow Chavez - "a military invasion from Colombia, US intervention (by air and sea attacks plus special forces to assassinate key officials) and an internal uprising by infiltrated terrorists and military traitors, supported by key media, financial and petrol elites."

That's an ominous scenario to consider, but now add to it the kind of Washington rhetoric that makes it all sound possible. Here's some of the language from 2005 to the present, and it's getting meaner. Various US officials including CIA Chief Porter Goss, Deputy Secretary of State Robert Zoellick, Defense Secretary Donald Rumsfeld and a growing number of others have called President Chavez a "threat to democracy" and an "elected dictatorship", and they said it without even a touch of irony. They accused him of doing "away with the rule of law, (packing) the courts (and) carrying out anti-democratic activities" like a dictator.

It gets worse. The just updated National Security Strategy, published so we can all read it, specifically singles out Hugo Chavez as "a demogogue awash in oil money (who is) undermining democracy and seeking to destabilize the region." The complicit US corporate media echo this venom as often as the Washington lunatics ask them to. And there's lots more of it including a recent US Army report that calls Hugo Chavez "the largest threat since the Soviet Union and Communism", and Don Rumsfeld compares him to Hitler.

And in case you missed it, I'll repeat what John Pilger (one of my great heros) wrote on March 30 on VHeadline.com titled: "British Channel 4 paints President Chavez a Dictator -- Hugo to go?" I watched that ugly and appalling piece of rot on March 27, painful as it was to do it. In his article Pilger says "This was a piece seemingly written by the US State Department....." It sure sounded like it, and I've heard enough of it through the years to agree. Here's a choice line from it Pilger quotes: "He (Chavez) is in danger of joining a rogue's gallery of dictators and despots --Washington's latest Latin nightmare." There's so much more of the worst kinds of gross lies and deception in the Channel 4 report, but you get the idea. Read the Pilger article if you haven't yet. Unlike myself, a simple amateur, he's a pro's pro, an honest one, and as good as they come.

All of what I cite above are the clearest signals yet something is up and will happen - the only question is when and precisely what. I only hope but do believe Hugo Chavez is listening and hunkering down for "the inevitable."

It makes no difference to the Washington crowd that Hugo Chavez was democratically elected twice, is loved by the overwhelming majority of his people and has already survived three attempts by the US to oust him. Coming up for sure is number four. Chavez surely knows this and also believes (as do I) that this time the US plan is to kill him. In US perverted logic, they believe - no more Hugo Chavez, no more Bolivarian revolution. Well, President Chavez may have a thing or two to say about the first premise, and the Venezuelan people may have a thought or two about the second, at least the 80% of them who cherish it and will likely fight to keep it.

Readers should understand and never forget that Hugo Chavez gave the people of Venezuela a participatory democracy and an array of essential social programs for everyone, especially the 80% or more poor or desperately poor who never before had them. That's why the majority of Venezuelans love him, will likely fight to protect and keep him, and will never easily surrender the essential services they now have. That's also why the US hates him and will try to remove him. By US rules it's corporations first, second, third, and to hell with the people. We're doing the same thing here in the US so why would we ever care about those dark-skinned Venezuelans - except the rich ones, of course. With them the only color that counts is green.

For the ordinary people everywhere, the virulent undercurrent of racism always surfaces as a key factor in the target countries we choose. Since the beginning of the republic, race hate has been so much a part of our white leaders' DNA that even caucasian Arab people aren't white enough. And the only post-WW II war we've fought that's an exception was the illegal aggression against and breakup of Yugoslavia. In that case, strategic factors outweighed race. The exception, as they say, proves the rule.

THE US ROAD TO TYRANNY LEADS THROUGH AFGHANISTAN, IRAQ, IRAN AND VENEZUELA

I've written several times before that the George Bush junta today is taking the US from a republic to tyranny, and we're already perilously close. This is a man who believes he's "above the law" and the "Constitution is just a goddamed piece of paper." I say this in deadly seriousness, this is not a test, it's real and it's coming unless we find a way and soon to stop it. Is anyone paying attention? All my senses detect it enough to make my skin crawl, and I'm desperately trying to sound the alarm to all I can reach including Hugo Chavez who I respect, admire and can only wish we had someone like him here. We need a lot of Hugo Chavezes and a few more Paul Reveres to echo the alarm, but this time it's not a case of "one if by land and two if by sea." It's coming at us from all directions, and it may be armed with a nuclear warhead abroad and the end of our republic and sacred constitutional rights here with martial law and tyranny replacing them. It's that serious. ! Is anyone listening?

Stephen Lendman lives in Chicago and can be reached at lendmanstephen@sbcglobal.net. Also visit his blog site at sjlendman.blogspot.com.