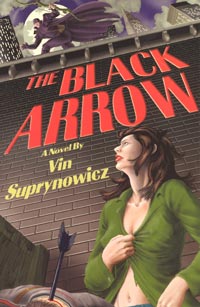 A condensed version of this review appears in the May/June issue of Backwoods Home Magazine.

Imagine it's the year 2030. The power of government at all levels has grown to the point of near total control and the power, as always, has corrupted. New York is blanketed by SonicNet, a system of sensors and cameras that monitors the entire city. Police, prosecutors, and judges work together, doing whatever is necessary to provide the appearance of fair trials while ensuring the outcome they desire.

Imagine your mayor is a misogynistic psychopath who uses his power to force the wives and daughters of men railroaded into prison to service his lust in exchange for "helping" reduce their long sentences.

Imagine a Federal police force -- the Homeland Defense Special Forces, who are themselves above the innumerable laws imposed on ordinary folk -- who "protect you" by setting up random checkpoints to scan passersby for ID, metal, drugs, and other contraband. If you object you can be arrested. If you try to run, you'll be gunned down. And if it's late at night, and you're a woman alone, you might well be dragged into an alley and raped by your "protectors."

Now imagine you're a wealthy, talented former rock star, a man of education, accomplishment, physical prowess, and high ideals who's had enough, who's decided it's payback time, and who, as The Black Arrow, comes across two members of the Special Forces as they attempt to rape another victim. So you put a razor-tipped arrow through the throat of one "protector." And when his brave companion turns to run...

Thus begins The Black Arrow, by Vin Suprynowicz, which the back cover tells us is "a tale of sex and violence; freedom and fertility; rebellion and revenge. With lots of rock and roll."

Vin Suprynowicz is a nationally-known columnist and author of several meticulously researched non-fiction books A tireless researcher, his writings deal with rights, freedom, intrusive government, and libertarian philosophy. His first foray into fiction has produced a freedom-oriented tale of intrigue and oppression, resistance and romance that contains richly-drawn characters with a plot and straightforward writing style that keep you turning pages well past your bedtime.

Set in a very possible near-future, The Black Arrow combines style and substance into an inspired and inspiring story of how a determined individual who is willing to risk everything for his freedom can inspire others and change the course of history. As the saga unfolds, rights, privacy, and freedom exist only in the imagination of a few, most notably The Black Arrow, whose single-handed campaign of resistance has begun to infect others with hope and a determination to overthrow their oppressors.

Fictionalized accounts of recent real-world atrocities are woven into the narrative to explain The Black Arrow's motivations and actions. More important, though, these accounts educate the reader as they entertain. (Simple internet searches will easily locate reports of the actual events he describes.)

It's fitting Suprynowicz dedicated the book to one of his characters, Madison, who we meet in the opening pages, for while she is not the central character, she is the center about which the story revolves; a woman of strength, skill, character, tenacity, vision, determination, and passion; a woman a freedom-loving man would want as his partner and lover.

Vin takes similar care in crafting all his characters, from Andrew Fletcher, the rich, talented, determined leader of the resistance, to Daniel Brackley, the warped, powerful, mayor of Gotham, to Cassandra Trulove, the intrepid reporter outraged by government excess and abuse, to minor characters like Jimmy "Ratzo" Rizzolo, denizen of the sewers and tunnels that form the underworld of Gotham, and everyone in between.

There's a little something for everyone in The Black Arrow. Those devoted to freedom and individual rights will cheer at methods the heros use to sting, then wound, then finish off the opposition. Weapons aficionados will appreciate the discussions of bows, firearms, and European and Japanese swords. Music lovers will enjoy the many song references and lyrics interwoven at key spots. And romantics will find more than one accomplished, beautiful woman vying for the affections of our hero.

I don't know if Vin set out to write an instruction manual for advancing the ideas of living free and for resisting the erosion of freedom, but his novel is just that. And it's written in such an easy-going, accessible manner that anyone who reads it cannot help but understand, and hopefully embrace, the basics and ideals of what the freedom movement represents. The only way this novel could have been made better was by including a CD with all the songs referenced in the book.

If you care anything about privacy, rights, or freedom, or if you just want to read a first-rate epic of intrigue, adversity, and triumph, The Black Arrow is not to be missed.

A Novel by Vin Suprynowicz

The Beauty And Simplicity of Moral Clarity

Something We Can All Agree On