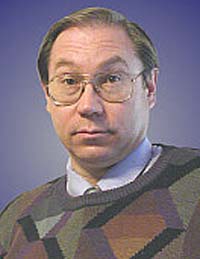 Why I Am Not a 'Conservative'

Precise language facilitates clear thinking, which may help explain why our politics are in such a muddle.

What is a "conservative"? A conservative is someone who wants to keep things pretty much as they are, dubbing any major shift in direction a "risky scheme."

By that definition, who in Washington today are more conservative than the so-called liberal Democrats, yapping like protective bitches, should anyone approach their overgrown brood of social welfare programs? Those puppies may have grown far too large over the past 40 years for even the welfare state's distended nipples – any sensible owner would get them out of that nursing pen and send them on their way before the insatiable mutts suck us completely dry – but the Democrats will have none of it, shrieking that even a modest plan to allow workers to shift some small part of "their" Social Security "contributions" into privately owned accounts would "leave children and cripples and old people starving in the streets!"

But if the leftist Democrats are in fact conservatives, why do we call them "liberals"?

Beats me. The 19th century definition of liberal – we now use "classical liberal" to maintain the distinction – was basically a laissez faire type who favored free trade and sound money. True "liberals" wanted low taxes and not much meddlesome regulation.

Sounds modest enough. But anyone who really took those precepts seriously today would have to call for a vast and real reduction in the size and intrusiveness of government at all levels, boarding up all kinds of departments and agencies.

Such positions are today the lonely terrain of the "third parties," widely reviled as radical wackos. In Nevada, we have the Independent Americans, some of whom are refreshingly bold on these issues, though the party seems unable to drive off an oversized subset of confused, populist conspiracy buffs, anxious to blame all our problems on those timeworn scapegoats: the queer, the pot smoker and the Jew. (We will not delve, today, into the Uniform Commercial Code or the yellow fringe on the flag.)

I make no secret of preferring the more consistent smaller-government philosophy of the Libertarians. Though in today's America, the Libertarians (precisely because they threaten to shut down the pork parade, rather than merely diverting it to a new coalition) might poll 4 percent on a good day.

But if such "fringe wackos" are the only remaining true "liberals," what are the Democrats?

Socialists, of course. Hidebound, reactionary socialists. They want to keep redistributing wealth at gunpoint from those who work hard and invest wisely to those who don't (see their hysterical opposition to the elimination of the death tax) – a course of action that has proven not just economically enervating but highly conducive to mass murder, tyranny and terror anywhere it's been tried for the past 90 years.

Glad we got that straight. So, what are the Republicans?

Damned if I know.

We pretty much knew where the Grand Old Party stood when they nominated first Barry Goldwater and then Ronald Reagan for president.

But after the Republicans came surging back 20-odd years ago, vowing to close down the wasteful and counterproductive federal Departments of Energy and Education (it would have been a good start) – they did none of it. Never even tried. In 22 years they have repealed no significant infringement of the Second Amendment, closed no significant federal agency or program.

They smile like Br'er Rabbit in the briar patch as the leftist press dances their stylized political Kabuki, decrying Republican "budget cuts" that are really nothing but modest reductions in the rate of bureaucratic growth.

Tax collections have soared beyond the wildest dreams of the tyrant Roosevelt and the reprobate Johnson, yet these "conservative Republicans" have raced to spend it all like drunken sailors – and the Times and the Post still crown them with the coveted sobriquet of "budget slashers"!

Yes, Bush the Second introduced that not-bad plan to gradually transition Social Security from a general-fund poverty handout to privately owned accounts that one could leave to the widow and kids. But after promising to spend "political capital" pushing it, Mr. Bush ended up letting it slowly sink beneath the waves as he instead frittered away all that "capital" invading Iraq, a country that had nothing to do with September 11th.

Oh, the Republicans mouth some pious platitudes about "family values": stopping gays from getting married, protecting us from Janet Jackson's breast and from the entirely symbolic and almost nonexistent crime of flag burning – as our ship of state cruises gaily on toward the cataract of hyperinflation and bankruptcy.

I'm so impressed. Have they created a tax credit program to make it easier for parents of modest means to escape the government youth camps by "writing off" private school tuition at the bottom of their tax forms? No.

They won't even do the one thing that might really reduce the abortion rate they keep moaning about: end all aid to families with dependent children ("You need a husband, not a case worker") and regulation of employment (including the job-killing "minimum wage"); stop stretching out three years' worth of secondary education to a mind-numbing six years of boredom; encourage kids to cram for an exit exam, graduate, enter the job market, marry and start properly supporting legitimate families when they're 16 – and already having sex and getting pregnant anyway, almost as though that's what Nature's God intended.

Just how far off base have today's Republicans strayed?

Ed Feulner of the Heritage Foundation – your quintessential modern "conservative" think tank – finally laid his cards face-up in an op-ed piece in this section March 26. In the essay, headlined "Curing the conservative crack-up," Mr. Feulner proposed six criteria by which conservatives should weigh any proposed government action. Among his criteria were "Does it make us safer?" and "Does it unify us"?

It's hard to imagine any of the world's worst dictators having any problem eagerly embracing those justifications for their actions.

Freedom often looks dangerous, disorderly and divisive; bureaucratic control and the cops reading our mail, "wanding us down," and/or peering in every window are nearly always sold as "necessary to make us safer." And there sure is a feeling of "unity" as we're herded down those airport cattle chutes or race to mail in our tribute every April 15.

Would most Americans agree it "makes us safer" to "allow young black and Hispanic men to walk around carrying machine guns"? Probably not. Yet the Second and 14th amendments require that this be "allowed." If this is not "allowed," you're living in a police state.

How about re-legalizing all drugs, without restriction? The federal Constitution grants Congress no authority to regulate drugs or any other medical substances or technologies; the Ninth Amendment bars the federal government from fighting any kind of "War on Drugs" whatever.

Ending the "War on Drugs" would surely make us safer in our homes from the threat of armed stormtroopers kicking in the "wrong door." Yet why do I suspect Mr. Feulner would not endorse unrestricted re-legalization, rolling this federal intervention back to pre-1933 levels?

Most telling of all, however, were the criteria Mr. Feulner did not include: "Does it enhance individual liberty?"; "Does it serve to reduce tax collections and thus make the government smaller and less bothersome?"; "Is the power to do this thing specifically enumerated in the U.S. Constitution?"

America's "heritage" is one of freedom – not nanny-state safety, not big-government "efficiency." And I fear the course we need to steer in order to return to such a realm of limited government is unlikely to look very "conservative" at all.

Vin Suprynowicz [send him mail vsuprynowicz-at-reviewjournal-dot-com] is assistant editorial page editor of the daily Las Vegas Review-Journal and author of The Black Arrow.