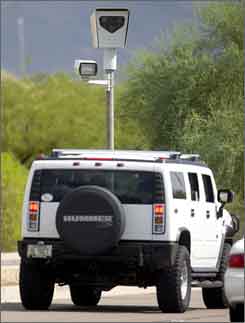 Smile! You're on a Redflex camera

Outsiders are screened by a receptionist before being buzzed in.

But this is not some super-secret federal agency tucked within the office park near Scottsdale Airport. It's the headquarters of Redflex Traffic Systems.

You've probably never heard of them, but Redflex may someday get to know you better than you'd like.

The company makes the high-tech equipment that snaps "gotcha" photos of drivers who run red lights or are speeding. Redflex in many localities helps process the tickets, too. While enriching some city coffers, it also enables cops to nab lawbreakers without being on the scene.

Redflex Traffic Systems, with $26 million in U.S sales last year, has emerged as one of the fastest-growing companies within an industry whose growth potential it believes is staggering. The industry could some day become a $3 billion juggernaut, Redflex recently told analysts.

Ten years ago, a handful of cities in the USA had red-light cameras. Today, the number is 160, the Insurance Institute for Highway Safety reports. But use of the traffic cameras has caused citizen protest in some places, and some states — including New Jersey and Wisconsin — have banned them.

No matter. The unit of Australia-based Redflex Holdings is eyeing 3,000 U.S. cities with populations of more than 50,000 as potential customers. "The market is virtually untapped," says new CEO Karen Finley, in an interview in her office here.

Even so — thanks to the hot reactions the cameras sometimes generate — it's no accident that Redflex keeps its public profile very low and its name off the door.

"That's for the safety of my employees," says Finley, who was named CEO six months ago. "People can get very upset over traffic tickets."

Particularly those that come to them in the mail after they were caught by Big-Brother-like traffic cameras.

Not that all violators are surprised. The company has some crystal-clear photos of drivers — angered by the presence of cameras — who have intentionally run red lights while giving a one-finger salute to the Redflex cameras. Or of naked backsides displayed for the cameras.

Finley says she's baffled about her industry's image problems. She shows a reporter digital clips of cars involved in accidents that Redflex cameras had caught running lights. Speed sensors under the street send signals to the cameras to make digital images of violating vehicles six seconds before and six seconds after they run the light. Photos also are shot of the license plate and, in some states, the driver's face.

One of Finley's clips shows a car going airborne before landing on a pedestrian in a crosswalk.

"I've seen a lot of really bad accidents," she says. "It's very humbling to be involved with a company that saves lives."

The Federal Highway Administration credits traffic cameras with reducing front and side crashes by 25% in a 2005 study. The benefit was offset some by a downside: rear-end crashes increased 15%.

In 2004, the most recent year available, more than 900 people were killed and 168,000 injured in crashes involving red-light running, says the group.

Those are numbers Finley hopes her company can help lower.

"All we're trying to do is effect a positive change in driver behavior," says Finley. "We're far less intrusive than a police officer."

Redflex has 600 cameras in 87 cities in six states. Roughly 200 more will be installed this year. It has 60 cameras in Chicago. More than 40% of all traffic cameras installed in the USA are Redflex.

Then, there are the tickets. Redflex is helping to dole out about 4,000 traffic citations a day, or just under 1.5 million a year. The company's cut per ticket varies by city, but in its hometown, Scottsdale, Redflex pockets about $40 from each $180 red-light fine.

Making money on the tickets does not make the company lots of friends.

For spying on, then snitching on, lawbreaking drivers, Redflex and competitors such as Affiliated Computer Services and Nestor Traffic Systems have critics. Some say the cameras invade privacy. Others say they're inaccurate. Some say they cause erratic driving.

"It doesn't make us more careful drivers," says Riki Cox, a pharmaceutical sales representative from Scottsdale, who has been caught by the cameras twice for running red lights and once for speeding. "It makes us more paranoid drivers."

Three months ago, she spent $26 for a can of PhotoBlocker spray that claims to blur license plate images so that they're unreadable to the flash cameras. She's had no tickets since, though she knows she's been caught by the cameras.

Finley, however, insists the various sprays are all bogus.

Perhaps the toughest critic of the cameras is the National Motorists Association. It's a driver advocacy group bent on keeping traffic flowing. It says that re-timing yellow lights — for one extra second — is more effective than installing traffic cameras.

"Putting up a camera only rewards a city for poor engineering," spokesman Eric Skrum says.

Finley is unmoved. "People who obey the law never have to deal with us," she says.

Soon, Redflex may seek more serious lawbreakers than those who run red lights. The company has just begun to look into potential for growth in the homeland security business, Finley says.

There have been occasions — which Finley can't detail for national security reasons — when federal officials have asked Redflex to review its videotapes for information that could help identify terrorists.

More recently, the camera-enforcement business is expanding beyond red-light runners. Under a pilot program with the city of Scottsdale, Redflex placed six cameras along 7.8 miles of freeway to catch speeders. Not just any speeders, however. Only those going 11 miles per hour, or more, over the 65 mph speed limit. The first day — when warnings instead of citations were sent — it snared 2,000 violators.

Redflex and its competitors are frequently criticized as invading personal privacy. Such criticism may get more vocal as the industry looks to expand the uses of its technology.

"If you take it to its logical extreme," says Beth Givens, director of Privacy Rights Clearinghouse, an advocacy group, "we could become a society where automated systems are enforcing the law — a system of ubiquitous monitoring."

But Finley points out that cameras already "watch" people at ATMs. And at many convenience stores. And in offices all over the country. And in transit stations, airports and many other public spaces.

Security cameras are part of our culture, she says. Besides, she says, "When you use a public roadway, you give up your right to privacy."

In other words, run a red light, and you've asked to be photographed.

Finley, whose company shoots those red-light candids, is not, however, comfortable in front of the camera.

When a newspaper photographer asks her to pose, she recoils. "I hate being photographed."

It takes only a moment for her to recognize the irony.

1 Comments in Response to Smile! You're on a Redflex camera - Photo Radar HQ in Scottsdale

I find this interesting ...

"There have been occasions — which Finley can't detail for national security reasons — when federal officials have asked Redflex to review its videotapes for information that could help identify terrorists.

How are they doing this with cameras that supposedly go on and off for a few seconds as a car whizzes by over a sensor, supposedly only filming people who have run red lights or violated speeding laws? Are the feds and local PDs only on the lookout for terrorists and other criminals who just happened to run red lights and speed?

Something stinks here. Anyone else starting to get the idea that these cameras are taking *everyone's* picture? ...