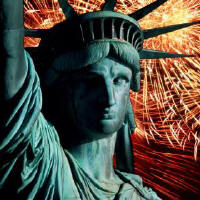 No,no, I didn't do it. No open letter to the LPC. No insisting that our national chair ban the entire state party from the LNC due to hooliganism, sad sackery, neuroses, quirky mysticism and a ruling on slippers. No smarmy remarks or questions as to why those hate "povertarians" are usually "slobertarians."

If you haven't guessed, I am sick and tired of the Libertarian Party of California. On its best day it is a force for comedy and on its worse it is simply an impediment to a free society.

No, I don't mind that each and every member past and present of the LPC ExCom possesses a personality defect or some completely untoward eccentricity. What I mind is that every faction insists that its vision of the LPC is the true and only heaven. Meanwhile, I'm just some anarchist crank who gets elected merely because I possess a vagina.

Granted, I am developing a fondness for this collection of kooks, hence, I am issuing not so much a fatwa but a guide to how and why I will vote any goddamn way I want for the remainder of my term.

Please: No emails, no plaintive phone calls. I'm done with the plots, the therapy sessions, the tormented revelations. Like the rest of you, I am voting based on my values and if you don't like it you can vote me out in 2008 when we have our convention in an efficiency off of Wilshire or a cargo ship off of Novaya Zemlya.

1.) Operation Breakthrough--It is distasteful however well meaning to create a professional class of libertarian bureaucrats through elections to non-partisan administrative boards. While I maintain the deepest respect and affection for our chair, Operation Breakthrough is antithetical to the goals of a libertarian society and merely adopts the strategy of our oppressors.

2.)The excluded LPC middle, reformists and moderates--I have often heard the cry of "we want people who want to be part of something larger than themselves." "We want to do whatever works." "We want freedom now!" "Wouldn't you rather have some freedom than none?"

First, this is the language of the collectivist, the "democrat," and ultimately the mob. The fight for freedom is often a solitary struggle. While we come together to promote libertarian values, the desire for liberty must emanate from within each rational man. The language we use must reflect our ultimate goals.

Second, the shift toward "holistic values" is a dangerous development as it slouches ever so slowly with its promises of "moderation" and "incrementalism" to a libertarianism without liberty as its primary value.

Without liberty the other values are meaningless and more importantly as radical individualists each man must decide for himself what is his hierarchy of values.

Finally, as we slide toward a moderate platform with an increasing reluctance to stand by our radical principles, we demonstrate no understanding of the Hegelian dialectic, human psychology or recent political history. Those yet unknown fellow travelers among us crave, "a choice, not an echo."

We dissuade freedom fighters from the bold move of casting a vote for liberty if we demand that they accept a bland rehash of failed GOP policy.

As for the big tent, well, Mr. Rothbard was right. "We can't accept all the shit that walks in off the streets."

3.) "Pro War Libertarian" is not an acceptable deviation for those in leadership posts. This is not 1971. We are no longer a club for Randians angered with Nixon's price controls. The Libertarian Party has developed a clear and consistent message and those in leadership posts should reflect it. While we should offer our hand in brotherhood to those thoughtful conservatives, we should work to persuade them that the non-aggression principle is the lynch pin of a civilized people.

4.) In an effort to stay true to my anarchist moral core, I have disaffiliated with the Grassroots Caucus. While I unquestionably support the caucus' principles, I must give a "no confidence" vote to its leadership which remains mired in trivial and petty stylistic conflicts with the Ex Com while police brutality, government theft of private property and the occupation of foreign soil remain the order of the day. None of which will change if we merely concern ourselves with the "corporate image" of our current Ex Com leadership. While we argue over what to wear, the revolution takes place outside without us. In Liberty,

"And my mission is to be absolutely as painful as possible in every situation." --Camille Paglia

1 Comments in Response to Libertarian National Committee Member is angry... with Libertarians

For all the pragmatists out there who hate the non-initiation of force (or fraud) principles because it is too hard to explain and makes it difficult to recruit new members ... maybe we don't want you recruiting new members.

If it is too hard to explain why you shouldn't start fights. If the people you are trying to recruit balk at the idea of restraining themselves from throwing the first blow. Maybe you should try your luck with a "real" political party where you stand a real chance for a position at the trough. They understand what a crazy concept non-initiation of force is. Why, how are you going to raise funding for your projects or keep the masses in line without setting an example by breaking a few eggs now and again?