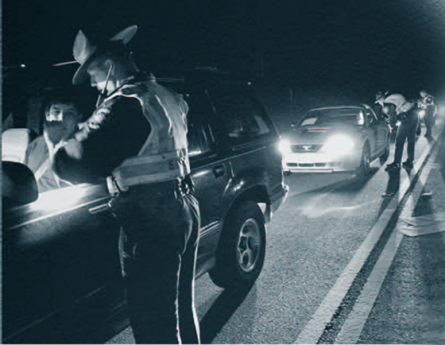 With labor day weekend upon us and the holiday season right around the corner, American motorists must once again be extra vigilant against those with little respect for the rights of others and even less regard for the traveling public's safety and security.

I do not speak of those who irresponsibly operate motor vehicles under the influence of alcohol or drugs. We hear enough about them on a regular basis. Rather, I refer instead to those who would have us abandon essential liberty for the mere illusion of increased security.

In a classic case of the cure being worse than the disease, the National Highway Traffic Safety Administration, NHTSA, has been slowly corrupting local law enforcement agencies. They've done so with the promise of easy money in exchange for subjecting millions of innocent individuals to harassing, intrusive and degrading searches and seizures on America's highways absent individualized suspicion of wrongdoing. For those of you who've been lucky enough to avoid such encounters, I speak specifically of so-called sobriety checkpoint operations. Local police operations paid for in full by federal grants from a federal agency pouring a federal agenda down the throats of local communities.

Now before anyone gets the wrong idea that I somehow condone drinking and driving, I can assure you this is not the case. Intoxicated drivers have reaped tragedy on America's highways over the years. Many lives have been lost and much property has been destroyed by the irresponsible excesses of individuals who can't or wont control their own actions. Such individuals should be held fully accountable for the harm they have caused others in the appropriate forum. In addition, education of the dangers associated with DUI should continue. What should not continue however is the wholesale violation of individual rights by law enforcement under the auspices of combating DUI.

Sobriety checkpoints represent just such a violation which in turn lead to further abuses by those who profess to serve and protect us. Worse still, it's well recognized in both law enforcement circles and the courts that in comparison to tried and true policing methodologies that utilize reasonable suspicion and probable cause, sobriety checkpoints are largely ineffective at removing intoxicated drivers from the road. Take for example, this dissenting view from a Pennsylvania Supreme Court Justice in the case Commonwealth of Pennsylvania v. Beaman:

Justice Nigro goes on to state:

"The other empirical data before this court for the above-referenced time period shows that the total number of man-hours per arrest for suspicionless checkpoints was 28.77 whereas only 18.82 manpower-hours were required for each DUI arrest stemming from roving patrols."

"In the face of these statistics, I simply cannot agree with the majority that Appellant has not proven the ineffectiveness and hence, the unconstitutionality of suspicionless checkpoints. The bottom line here is that checkpoints are not the least intrusive or, as the statistics on this record leave no doubt about, the most effective means of catching and deterring drunk drivers. They should be deemed unconstitutional."

Less someone think the numbers quoted above are an anomaly to Pennsylvania, statistics from suspicionless checkpoints conducted on labor day in Pima County, Arizona last year paint a very similar picture. Out of 571 suspicionless stops made at a sobriety checkpoint in NW Tucson, only 4 DUI arrests were made. This represents a 0.70% hit rate - a statistic almost identical to that in Pennsylvania over a three year time frame. Statistics from around the country show similar results - suspicionless checkpoints are a waste of limited resources and promote inefficient, and oftentimes illegal, law enforcement practices.

Why then are suspicionless checkpoints becoming one of the most prominent tools utilized by the burgeoning American police state? The following quotes from the federal agency pushing this tyrannical agenda, the National Highway Traffic Safety Administration, begins to explain this new trend in community policing:

* "Sobriety checkpoints increase the perception of the risk of arrest, if they are adequately publicized and highly visible to the public."

* "Resource intensive operations discourage a number of law enforcement agencies from conducting sobriety checkpoints, particularly smaller agencies or others that can ill-afford to dedicate limited staff to such an operation. The end result is that some small agencies are reluctant to use this effective tool. This results in less frequent use of checkpoints, and correspondingly, less exposure and awareness by the public and a reduced perception of risk of arrest for DUI."

* "When drivers perceive the risk of being caught is high their behavior changes immediately."

In other words, the NHTSA doesn't even bother trying to argue suspicionless checkpoints are an effective tool at removing drunk drivers from the road because statistics overwhelmingly prove otherwise. Instead, the NHTSA simply argues suspicionless checkpoints increase the perception of the risk of arrest while ignoring effective law enforcement techniques that don't subject 99.3% of the population to arbitrary and harassing enforcement activity. There's a term generally associated with tactics used by one small segment of society to strike fear and intimidation into the rest of society while utilizing the threat of force and/or violence to sway public perception. I'll let the reader determine to what I am referring.

This enforcement mind set should be enough to scare any freedom loving individual. Where does it stop? Why not expand such reasoning to arbitrary home searches absent reasonable suspicion or random searches and seizures of individuals walking down the street? After all, a small percentage of such individuals will either be contemplating or engaged in some illegal activity at any given time. What better way to invoke fear and terror in such individuals (and everybody else) than with random, arbitrary suspicionless searches and seizures?

While enforcement regimes are spiraling out of control in this country, as the proliferation of suspicionless checkpoints makes abundantly clear, there are effective ways to confront such outlandish abuses by enforcement personnel. On a community basis, we must get the federal government out of local law enforcement. All that is required to fix this is the political will to prohibit the use of federal funds by local law enforcement agencies. This will once again make local law enforcement responsive to local communities instead of state whores to a federal pimp.

The other method involves more direct action on the part of the individual. While the courts have largely rubber stamped the faulty reasoning and individual rights violations associated with suspicionless checkpoints, law enforcement agencies must nonetheless adhere to certain criteria when conducting such operations. One such requirement is the development of publicly assessable sobriety checkpoint guidelines that must be followed by the department in order to remove individual officer discretion at the scene and limit the scope of the operation to removing impaired drivers from the public roads.

Earlier this year, I made an Open Records request to the Pima County Sheriff Dept. (PCSD) for a copy of its guidelines and associated documentation. Much to its credit, the department complied with the law and provided me with copies of the requested documentation.

In the PCSD Memorandum from last year's labor day operation, Sgt. Woolridge instructed the participating officers to arrange their schedules such that time spent on suspicionless checkpoint operations would fall into the category of overtime (that's correct - your right to be free from suspicionless searches and seizures is being violated so that sheriff deputy's can make a little extra money on the side). The memorandum also identifies the Governors Office of Highway Safety (GOHS) as the agency that distributes the funds for the operation. While this is technically correct, the reality of the situation is that the GOHS gets its funding from the National Highway Traffic Safety Administration and redistributes the funds to local law enforcement agencies that meet NHTSA standards and criteria.

The guidelines themselves are even more interesting and reinforce several aspects of suspicionless checkpoints I knew must be true in order for any charade of constitutionality to exist within such operations.

The following quote reinforces the fact that sobriety checkpoints can't be used as a pretense for a drag net operation or for random documentation checks such as license, registration, and insurance. While such requests can be made once an officer has reasonable suspicion that the driver may be impaired, it cannot be a purpose of the initial stop. Some police agencies attempt to blur the line on this distinction as I've fully documented here.

"The following question/statement shall be made upon approaching a vehicle: "Good evening, this is a Sobriety Checkpoint aimed at deterring impaired driving. Have you consumed any alcohol and/or drugs today?" If the answer is no and there is no compelling reason to detain the vehicle, hand the driver a pamphlet and state, 'This brochure explains the Sobriety Checkpoint program. Please look it over at your leisure.' Unless the Deputy observes evidence of impairment, or there is evidence of a more serious violation, the motorist should be allowed to proceed on their way. A search of the vehicle, or passengers, should be conducted upon probable cause or incident to arrest only."

The next quote reinforces the fact that participation in such unconstitutional enforcement activities is purely voluntary and astute individuals can choose not to participate by turning around and avoiding the scene of the crime altogether.

"A motorist who chooses to avoid the checkpoint should be allowed to proceed unless traffic violations are observed or probable cause exists to take other action. The mere act of avoiding a checkpoint will not constitute grounds for a stop."

The next quote is the most telling in that it makes it perfectly clear an individual doesn't even have to talk to or acknowledge the stopping officer. This is so because the mere act of rolling down a window and talking to an officer provides the officer with an opportunity to determine if alcohol is present through smells emanating from the cab, passive alcohol sensors utilized by police officers in flashlights and other devices, or the tone/tenor of someone's voice. Since police officers cannot (legally) force anyone to incriminate themselves, they obviously can't (legally) force you to interact with them at a suspicionless checkpoint.

"Drivers who refuse to roll down their windows in order to avoid contact with a law enforcement officer will be waived through and may be followed by an observation car unless reasonable suspicion/probable cause exists to further the investigation."

Given these very real limitations that enforcers must acknowledge at suspicionless checkpoints operating in Pima County, Arizona, individuals confronted by such unconstitutional demands on their person should exercise ALL their rights and refuse to interact with stopping police officers. These enforcement abuses will only continue to proliferate until a critical mass of individuals say enough is enough.

As such, I recommend that individuals who care about individual rights stop consenting to unreasonable demands from public servants, vigorously confront such abuses when they occur, and vote politicians out of office who continue to undermine individual rights while accepting federal bribes to do so. This includes county sheriff's who have forgotten who their constituents are.

I wish you all a safe and enjoyable labor day weekend - from both intoxicated drivers who would put you in harm's way and those who would violate your rights in order to catch them.